M&A; advisory fees from completed deals rose by 41.2%, compared with the same period last year, and totaled $12.8 billion for the first half of 2010, according to an estimate from Thomson Reuters/Freeman Consulting. Goldman Sachs was the top financial adviser on deals announced in the first half, followed by Morgan Stanley, Deutsche Bank, J.P. Morgan and Credit Suisse.

Private-equity-backed M&A; activity rose 125% in the first half, compared with the same period last year, and totaled $73.4 billion. The overall value of UK buyouts in the period has already exceeded the 2009 full-year total, according to data published by the Centre for Management Buy-Out Research and sponsored by Barclays Private Equity.

“After a strong start to the year, driven by a surge in large secondary buyouts, there has been a slowdown in momentum, although 2010 will still show the market recovering from the lows of 2009,” says Christiian Marriott, director at Barclays Private Equity. “The value of private-equity-backed buyouts [in the UK] in the second quarter was just over half the value in the first quarter.” 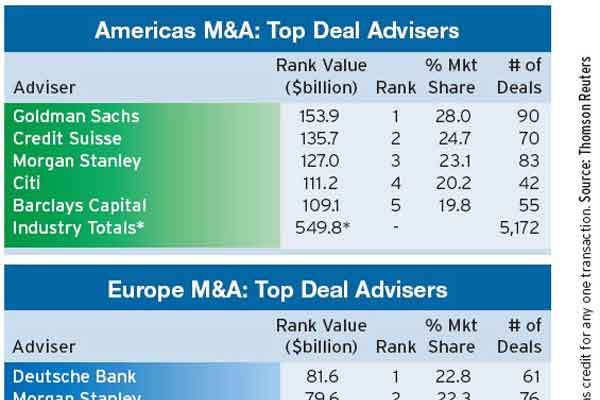 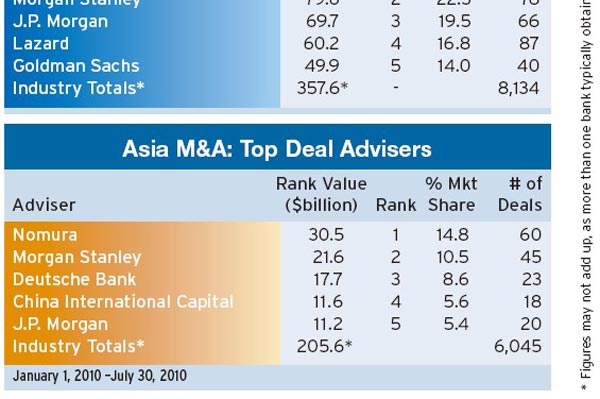 Marriott says a range of factors caused the slowdown, including volatility in global equity markets, the general election in the UK and uncertainty about the future capital gains tax. The exit market has remained quiet in 2010, he says. “A number of large flotations were expected this year, but renewed stock market turbulence has held back the IPO market, with only two private-equity-backed IPOs taking place so far,” Marriott says.

US leveraged-buyout transactions showed strength in the first half of 2010, accounting for 12.5% of total US M&A; volume, according to Thomson Reuters. Among the notable transactions announced in the first half were the $3.9 billion acquisition of Extended Stay America by Centerbridge Group, Blackstone Group and Paulson, and the $3 billion acquisition of Interactive Data by Silver Lake and Warburg Pincus.

Overall European M&A; activity rose just 1.8% in the first half of 2010, to $448 billion. Following the collapse of Prudential’s $35.8 billion proposed takeover of American International Group’s main Asian unit, the largest European deal announced in the first six months of this year was NewsCorp’s $13.7 billion offer to acquire the remaining 61% stake in British Sky Broadcasting.

The largest M&A; deal globally in the first half was America Movil’s $27.4 billion acquisition of Carso Global Telecom, in a stock-swap transaction. Mexican billionaire Carlos Slim orchestrated the deal as part of an effort to consolidate his telecom holdings. At the same time, America Movil launched a second tender offer to acquire the remaining 39% stake in Telmex Internacional, in a stock-swap deal valued at $6.6 billion.