Capital raisings using depositary receipts (DRs) nearly tripled in the first half of 2011, compared to the same period a year earlier, while DR trading volume and the number of programs available to investors both set records, according to BNY Mellon.

More than 80 billion DRs valued at $1.9 trillion were traded in the first six months of this year. Some 39 DR capital raisings worth $11.7 billion came to market in the first half from issuers in 11 countries.

On July 21, BNY Mellon named Cole-Fontayn as its new chairman of Europe, Middle East & Africa (EMEA). He will retain his existing role as CEO of the DR business at the bank.

Seven issuers from Russia raised $5.5 billion, accounting for nearly half of the first-half total. Companies in India and China had the largest number of transactions.

Russian firm VTB Bank’s $2.8 billion follow-on offering was by far the largest DR capital raising in the first half. A dozen offerings from companies in China totaled $2.6 billion, while the 11 issues from Indian companies raised a total of $200 million.

Some 79 new sponsored DR programs and 72 unsponsored programs were established in the first half of 2011. Issuers from Australia led with 13 new programs. A record number of 3,413 DR programs for issuers from 83 countries are now available to investors—an increase of 199 programs from a year ago.

The first over-the-counter DR program from Pakistan was established for Fatima Fertilizer. Vietnamese property developer HAGL established that country’s first- ever DR program, which listed on the London Stock Exchange. On July 27, First Quantum Minerals selected BNY Mellon as depository bank for the first Zambian DR program on the Lusaka Stock Exchange, which became the first exchange in Africa to list DRs.

“Providing an innovative solution for First Quantum to create the first Zambian DR shows our focus on connecting the world’s equity markets, literally from ADRs to ZDRs,” says Cole-Fontayn of BNY Mellon.

Among notable issuers that converted their unsponsored DR programs to sponsored programs so far this year are Russian firm Sberbank; QBE Insurance of Australia; Austria’s Vienna Insurance; and AIA from Hong Kong. “Sponsored programs can deliver additional value, both in heightened visibility to global investors and in service,” Cole-Fontayn says.

Global equity capital markets activity in the first half—including IPOs and follow-on offerings as well as DR issues—reached $412 billion, an increase of 27% from the first half of 2010, according to Thomson Reuters. Goldman Sachs was the leading equity underwriter, followed by Bank of America Merrill Lynch and J.P. Morgan. 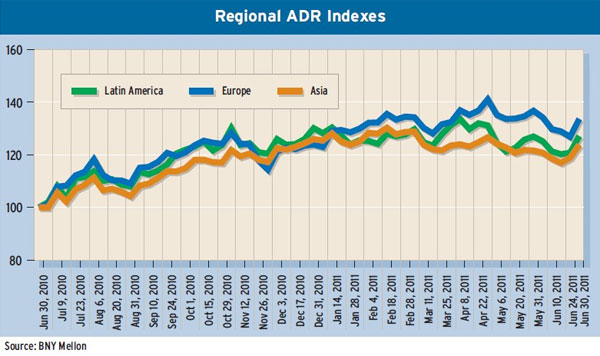