Spanish banks are struggling to regain momentum in the face of a sluggish economy and the need for further restructuring. 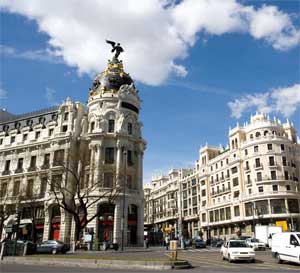 Three years after Spain’s decade-long real estate bubble burst, the country’s banks are still trying to find their footing. While the two largest Spanish banks—BBVA and Santander—have continued to grow, albeit driven by profitable Latin American operations, small regional savings bank have been struggling in a market characterized by slow economic growth, higher funding costs and unemployment near 21%. A recent banking sector stress test shows the storm is far from over.

Five Spanish banks failed the European Union’s stress test in July, reporting a capital shortfall of €15.2 billion. Banks had to show a core Tier 1 capital ratio of 5% and, unlike in the past, were not allowed to count generic provisions, money set aside for potential losses, as part of the ratio calculation. Another seven banks barely passed the test. With the Spanish banking sector’s bad-debt ratio hitting a record 6.5% in May, a 16-year high, stress test results brought few surprises and highlighted the need for further sector consolidation.

“One of the problems shown in recent stress tests is reduced profitability expected in the new groups of savings banks,” says David Renz, director of risk advisory at SunGard Ambit, a global banking sector solutions provider. “Further restructuring and rationalization is needed,” he adds. Renz foresees further consolidation: “Entities that are not profitable or solvent enough should merge with others to achieve economies of scale.” The government in February issued legislation that forces such consolidation.

The FROB state-backed restructuring fund in July granted Caja de Ahorros del Mediterráneo, one of the banks that failed the stress test, a €2.8 billion bailout. FROB will receive CAM shares and has taken over the bank’s management until it can be sold.

A CAM merger with three other savings banks fell apart in March, after which it once again began trying to attract private investors in June. CAM, one of the financial institutions hardest hit by the real estate meltdown, is located in the eastern coastal region of Alicante and operates in the midst of numerous unsold resort properties.

“The savings banks are restructuring—resulting from a series of imbalances derived from their higher exposure to real estate, their difficulty to access capital markets and their dependence on wholesale financing,” says Alberto Placencia Porrero, leader of accounting firm Ernst & Young’s capital markets group in Spain. “A number of legislative changes have addressed these issues and are enabling consolidation. The final picture is anticipated to be one comprised of fewer and more solid institutions.”

Placencia notes the number of institutions has already fallen from 45 to 18. “Consolidation has been significant and has stabilized and increased the average size of institutions,” he says. “However, the Spanish financial system is still less concentrated than in other markets, so there is room for further consolidation. That said, potential future waves of consolidation will more likely be driven by market and strategic imperatives rather than the restructuring process.”

Jason Karaian, senior editor for financial services at the Economist Intelligence Unit, contends the consolidation process faces some challenges ahead. “It will take time for the recent wave of consolidation to settle,” he says. “Once the new cajas [savings banks] formed by the recent tie-ups satisfy the regulators that they are adequately capitalized, the heavy lifting of integrating systems and rationalizing operations will begin in earnest.”

Karaian argues that, with growth prospects for domestically focused savings banks remaining scant over the medium term, further mergers are likely. For Karaian, savings banks’ large bad-debt overhang and limited growth prospects at home will force them to focus their efforts on cutting costs and generating post-merger synergies. “Banks added more than 7,000 branches in Spain between 2002 and 2008. Only about a third of these have since closed.”

Placencia says banks are already taking steps in the right direction to tackle the current downturn. They are increasing their capital to meet new legal requirements, he says, and proactively managing their liquidity and cost structure to improve the efficiency ratios of institutions involved in mergers. Banks are also converging business and risk models, and offering more selective and discriminative pricing structures. And they are integrating their distribution channels to improve or maintain quality perception among clients.

Banks are also increasingly sharing their risk with customers. The recent stress tests showed Spanish banks had a total of €12 billion in mandatory convertible bonds outstanding, much of them sold to retail clients at branches throughout the country. More than 129,000 retail clients bought such bonds from banking giant Santander alone in 2007, with those bonds set to convert into bank shares in October 2012. Competitor BBVA sold €2 billion in five-year mandatory convertible bonds to retail customers in 2009. Although the strategy helped banks boost their capital, retail buyers are now facing paper losses as the bonds convert into shares.

Two banks, Bankia and Banca Cívica, launched IPOs in July, amid the sector’s stress test jitters, though shares had to be priced at the bottom of their proposed ranges in order to attract demand and fell further in initial trading. Both banks needed to tap the capital markets to meet the country’s increasingly stringent capital requirements, which are now among the world’s highest since being hiked in March. Authorities indicated that the fact that the IPOs happened at all was a positive sign.

Fernando Pérez-Hickman, chairman of the board at Sabadell United Bank and managing director at Banco Sabadell America, both of which are divisions of Banco Sabadell, Spain’s fourth-largest banking group, remains bullish on the sector. “The principal challenge currently facing Spanish banking is to be able to effectively transmit the current solidity, high solvency levels and cash reserves that it actually has to the international arena, although it is constantly being undermined by the negative criteria of analysts and agency ratings,” he says. He notes that, in contrast to the situation in other European neighbors, few Spanish banks have needed to be bailed out since the crisis began in 2007.

"The Spanish financial system is less concentrated than other markets"

“The Spanish financial system as a whole possesses greater provisions than other banks and therefore a greater capacity to deal with crisis scenarios like this one,” says Pérez-Hickman. He says Banco Sabadell’s actual coverage available, including convertible and anti-cyclical, generic provisions, gives it a high solvency ratio of 8% in a worst-case scenario.

“A progressive upturn in the housing market is not far off, and everything points to a stabilization in results in 2012 and a beginning of renewed growth.”

In what some analysts are viewing as a positive step, JPMorgan Chase is aiming to sell Spanish residential mortgage-backed securities (MBS) this year, reviving a market that has been dead since 2007 when BBVA brought the last MBS deal to market. While the US banking group may face an uphill battle to attract takers, it says it already successfully overcame similar challenges when it revived the UK mortgage bond market in 2009 after a year-long hiatus.

Meanwhile, the economy is not likely to provide banks much relief. After stabilizing in 2010, the Spanish economy is showing signs of sluggish growth this year. The government cut its 2012 and 2013 GDP growth forecasts to only 2.3% and 2.4%, respectively. A government austerity program that aims to reduce the budget deficit to 6% of GDP this year, from 9.2% in 2010, unleashed violent street protests. The EU’s budget deficit ceiling is only 3%, or half of Spain’s target.

Socialist prime minister José Luis Rodríguez Zapatero has called for early general elections to be held on November 20, instead of the initial plan to hold them next March, in the hopes that revenue from tourists this summer, which will also temporarily boost job creation, will give his party an edge. However, polls show opposition right-wing candidate Mariano Rajoy in a firm lead over socialist candidate Alfredo Pérez Rubalcaba.

Both candidates have, nevertheless, vowed to continue to implement unpopular austerity measures. Pérez, a former interior minister who wants to revive a wealth tax nixed in 2008, says he will force banks to hire youths and will call for creation of a Europe-wide financial transactions tax. Rajoy says he will implement a “shock plan” to revive economic growth.

Whoever wins the race will have some important reforms to complete in order to overcome the impact of Spain’s worst recession in 60 years, including financial and labor sector reforms to strengthen the nation’s ailing banks and curb record joblessness. Spain’s unemployment rate, which has boosted the banking sector’s bad-loan ratio, is the highest in the EU and among OECD members.

“Unemployment remains unacceptably high, inflation is again above the euro area average and sovereign and bank funding costs remain elevated and volatile,” noted the IMF in a July report, still praising Spain for its strong response to the economic crisis. “The policy agenda remains challenging and urgent; there can be no let-up in the reform momentum.”