The EU summit in July not only reached agreement on a second bailout program for Greece, but just as significantly, it gave the European Financial Stability Facility (EFSF) the ability to respond to contagion by buying debt in the secondary market.

“We have long been of the view that the eurozone would move toward closer integration and eventually [issue] eurozone bonds, but we did not expect the heads of state to agree to something this significant today,” says Janet Henry, chief European economist at HSBC, based in London. The increased flexibility of the EFSF is a clear attempt to stem the contagion effect on Italy and Spain, she says.

The EFSF will be empowered to provide loans to countries for bank recapitalizations without subjecting them to strict conditionality programs. The entire eurozone is committing to joint borrowing in a way that allows the EFSF to extend loans to Greece for up to 30 years. Meanwhile, the European Central Bank (ECB) agreed to accept Greek debt as collateral, even if Greece is in selective default.

“These are all decisions that represent significant steps toward ongoing integration,” Henry says. “Yes, there are still risks, and markets will no doubt continue to await the necessary passage of legislation through national parliaments.”

The EFSF was created in May 2010 to enable the eurozone to raise funds in capital markets for financing loans to member states. With its new authority, the facility will be able to intervene in the secondary market—with the agreement of the ECB—if there are exceptional circumstances. In other words, to curb contagion.

EFSF bond issues are backed by guarantees given by eurozone member states of up to $633 billion. The inaugural benchmark issue for Ireland—a five-year, €5 billion ($7.25 billion) bond came to market on January 25, 2011, with Japan buying 20% of the total. On June 15, the EFSF placed a 10-year, €5 billion bond for Portugal.

The EU summit also reached agreement on private sector involvement in the new financing program for Greece. Voluntary participation will involve extending maturities and lowering interest rates on Greek government bonds. The Institute of International Finance estimates that the average maturity of privately-held Greek government bonds will rise from six to eleven years, and private investors would take a 21% loss on the net present value of their holdings.

Ratings agency Standard & Poor’s cut Greece’s credit rating to CC from CCC on July 27, saying that plans to restructure the country’s debt would constitute a selective default. Moody’s downgraded Greece a few days earlier, and Fitch said it was considering doing the same. “We view the proposed restructuring as a ‘distressed exchange,’ because, based on public statements by European policymakers, it is likely to result in losses for commercial creditors,” S&P; says. “In our opinion, the terms of both the exchange and rollover options appear unfavorable to investors.”

Questions remain regarding the implementation of the EU plan and the end result for Greece’s solvency position, says Lena Komileva, global head of G10 strategy at Brown Brothers Harriman in London. “The new EU deal has the potential to become a game changer with respect to the implications of the solvency crisis for the euro,” she says. “If sealed and implemented, the deal can go a long way to stem EU cross-border and sovereign-bank contagion.”

The deal is designed to improve the EU’s management of the crisis by arranging an orderly Greek default and by providing ongoing liquidity and increased capital support for the banking system, Komileva says. “Improved EU crisis management is crucial to stop the national solvency crisis from turning into a eurozone crisis,” she says.

The plan is specifically designed to mitigate the risk of a euro breakup by expanding the EU safety nets and by creating a template for orderly sovereign debt restructuring, according to Komileva. “This is what the euro needs to survive,” she says.

Greece has been offered a second bailout based on a restructuring of its debts and a development plan using EU structural funds, rather than just another cash loan, Komileva says. “The new EU deal does not end the solvency crisis,” she says. “It will not insulate Europe from the risks of a US credit downgrade, a weaker global economy and a more hostile market environment.”

Greece Bailout II was a useful first step in the crisis response, but not enough to turn around the markets, according to a report by the euro area economics division of the Royal Bank of Scotland (RBS). “Indeed, after almost three months of negotiations and effort, the Greek debt load will be at best reduced by 10 to 20 percentage points of GDP to what will still be seen as an unsustainably-high level,” according to the RBS analysis.

In the end, Greece will likely to continue facing rolling crises around the time of quarterly reviews by the International Monetary Fund (IMF), RBS says. “Doubts about the trajectory of the economy and the ability to raise privatization receipts anywhere near the targets will persist,” it says.

The level of detail provided so far is low, making it hard at this stage to really know how the new tools will work in practice and how efficient they will end up being, according to RBS. It says the EFSF’s size needs to be increased very significantly, with a view of ultimately having a lending capacity of around €2 trillion ($2.9 trillion) to restore investors’ confidence that the eurozone once and for all has dealt with its sovereign crisis. “The crisis will in our view linger, with markets likely to test the EFSF’s firepower,” RBS says.

German finance minister Wolfgang Schäuble says Berlin is opposed to giving the EFSF carte blanche to purchase bonds in the secondary market. “In the future, such purchases must only take place under very tight conditions, when the European Central Bank establishes that there are extraordinary circumstances in financial markets and dangers to financial stability,” he says. 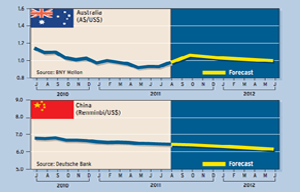 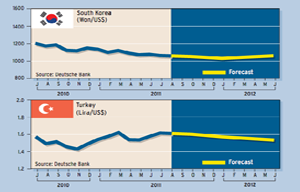