MALAYSIAN DOMINANCE PUT TO THE TEST 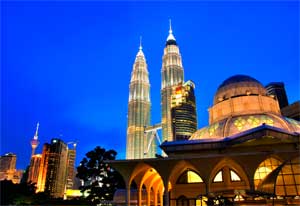 Anyone that does business or invests in Asia-Pacific will tell you that, as tempting as it may be, you should not look at the region as a homogenous whole.

Each country has its own political and economic climate, and regulators have a different take on what is permissible. The same is true of Islamic finance in Asia.

However, interest in Islamic financing is spreading across Southeast Asia, and it is not confined just to countries with large Muslim populations. Secular countries like Singapore, Hong Kong and Australia are modifying local laws and tax regulations to permit shariah-compliant investments.

The goals and business opportunities for Islamic financing vary greatly, depending on the jurisdiction, notes Afaq Khan, CEO, Islamic banking, at Standard Chartered Bank. He says, “Those countries with significant Muslim populations, like Malaysia, Indonesia and Brunei, have a different business opportunity, which is primarily retail and wealth management.”

"Countries with significant Muslim populations have a [unique] business opportunity"

“Then there are other countries like Singapore and Hong Kong,” Khan adds. “They are global centers in their own right. All of these countries will play a different part, and the success of one will not necessarily result in the failure of the other.”

Hong Kong’s initial focus is on developing a wholesale Islamic capital market, including Islamic bonds, equities and funds. Although it does not have a large Muslim population, it does have international banks with relevant expertise in Islamic products.

“Developing an Islamic finance market in Hong Kong is just a natural extension of our existing role,” says a Hong Kong Monetary Authority (HKMA) spokesperson. “It will add to the breadth and depth of our financial market by widening the spectrum of financial products and services available in Hong Kong.”

It also ties into Hong Kong’s role as a gateway for investors into mainland China.

The development of an Islamic capital market in Hong Kong can help facilitate the intermediation of funds between mainland China and the Islamic finance world, including the Middle East, fitting in well with its role as a center for international financial intermediation, according to the spokesperson.

Hong Kong is well on its way to developing Islamic financial markets, as the HKMA spokesperson points out: “A local bank launched an Islamic fund, and there are four global sukuk listed on the Stock Exchange of Hong Kong.”

“We have also seen the start-up of an Islamic banking window and the introduction of Islamic treasury products based on a commodity murabahah structure,” the spokseperson adds.

Indonesia, which has the largest Muslim population in Southeast Asia, is also ramping up its support for Islamic finance. In May, the Indonesia Stock Exchange launched the Indonesian Shariah Stock Index in an effort to attract investors, including those coming from the Middle East.

In January, Bank Indonesia announced as part of its policy direction for 2011 that it would “strengthen the competitiveness and resilience of rural banks and shariah banks.”

The central bank governor, Darmin Nasution, said the goal is to increase “professionalism and the quantity of manpower in the industry, provide robust and sound incentives, especially in the form of a conducive regulatory environment, and strengthen product innovation and infrastructure in Islamic banking industries.”

But Islamic banking assets are still relatively small in Indonesia, between 2% and 3% of total bank assets, according to some estimates.

“Indonesia is very interesting, due to the large Muslim population; however, it will have challenges in becoming a regional player in Islamic banking because so far it has not been able to compete effectively with regional players such as Singapore and Hong Kong and Malaysia,” says Safdar Alam, head of Islamic structuring at J.P. Morgan in Bahrain.

Alam believes that over time Indonesia should be able to match if not surpass Malaysia’s progress. “However,” he says, “during that time, Malaysia will continue to make advances.”

In the meantime, Indonesia is working with Malaysia to benefit from its experience and history in the sector, according to Alam. “Many key banking groups in Malaysia typically have some ownership and investment in banks in Indonesia too,” he says. In part this is because Indonesia wants to quickly develop its domestic sector and stimulate cross-border business, both of which Malaysia has excelled at.

"Many [banks] in Malaysia typically have some ownership... in banks in Indonesia too"

For other Asian countries, such as Singapore and Hong Kong, idea sharing, Alam says, is less likely. He notes: “In some ways, each center is a natural competitor of the other for international business.”

Reasons for building a new model vary, Vizcaíno says. “Either politically they wish to differentiate from Malaysia, or they are promoting a narrow Islamic product, as opposed to promoting Islamic finance overall, or they haven’t found the momentum yet.”

The HKMA says the same regulatory framework and supervisory approach apply to both conventional and Islamic banks in Hong Kong but, being a secular regulator, it is not in a position to establish a shariah advisory council to determine whether products are shariah-compliant or not.

“Instead, we would rely on the shariah committee of the relevant banks to ensure the shariah compliance of their products,” says the spokesperson. At the domestic level, whether other countries emulate the Malaysian model matters little, says Alam.

However, with respect to cross-border transactions, it becomes more relevant. “As a result of this there has been the gradual shifting of the kinds of products used in Malaysia so that they align more closely with other standards globally,” he explains.

One thing they all have in common is the need to change local laws so Islamic finance is on an equal footing with conventional financial instruments.

In Hong Kong, for example, the Hong Kong Monetary Authority says it is working with the government on a legislative proposal to amend Hong Kong’s tax laws to level the playing field between sukuk and their conventional counterparts in terms of tax treatment.

The HKMA spokesperson says there is some flexibility in the existing legal setup that allows for sukuk origination out of Hong Kong.

Pending the passage of relevant legislative amendments, though, the government has set up an administrative mechanism for considering and approving applications for tax exemption and stamp duty remission on sukuk issuance and trading. It is handled on a case-by-case basis.

But changing local regulations to permit Islamic financing is only one piece of the puzzle, according to Zain Azra’i Abd Samad, senior associate at law firm Eversheds. The political will also has to be there for Islamic finance to start to flourish. “When we started Islamic finance in Malaysia, we always believed it was a viable model and that it should be given support from all aspects of government,” he explains.

Remarking on why Islamic finance has not grown to the same extent in more populous Muslim countries like Indonesia, Samad says: “It is more about how serious the administration is in pushing through things to make it happen.”

“I’m not saying that Malaysia has all the answers because it started earlier, but what these other countries should do is emulate the motivational factor,” Samad adds. “You need the backing of the public and private sector to make it happen.”

As interest in Islamic finance spreads across Asia, most observers believe it can only benefit the industry in general. New markets will produce not just greater volumes but also new and unique products. Alam of J.P. Morgan says: “Up until recently, the GCC (Gulf Cooperation Council) was the only meaningful market, with strong competition with the countries within the GCC.”