Debt: US Hospitals Grow Their Coffers

Community Health Systems, one of the largest hospital companies in the US, refinanced $2.8 billion of its high-yield debt in July and August, taking advantage of low interest rates and rising investor confidence in the hospital-management industry after the Supreme Court upheld the Patient Protection and Affordable Care Act.

The new law may mean that hospitals will be stuck with fewer unpaid bills, since all US patients will be required to have medical insurance—or face a tax penalty.

Tennessee's Community Health Systems, which operates 135 hospitals in 29 states, issued $1.2 billion of eight-year senior notes in July under a shelf registration, to refinance existing debt. Credit Suisse led a group of 15 underwriters that managed the offering.

Community Health Systems returned to the private-placement market in August and sold $1.6 billion of senior secured notes maturing in 2018, with an interest rate of 5.125%. Both issues were increased in size to take advantage of strong investor demand.

Meanwhile, CIT Group said it would pay down $3.3 billion of high-yield debt with the proceeds of its senior note offerings in July. The commercial lender, led by former Merrill Lynch CEO John Thain, has refinanced $30 billion of debt since it emerged from bankruptcy in late 2009.

If the Federal Reserve and other central banks launch more-concerted rounds of monetary easing, the credit markets could become even more supportive of corporate refunding, according to a US corporate refinancing study by Standard & Poor's global fixed-income research department. However, worries about contagion from Europe's debt crisis, a harder-than-expected landing in China's economy and a potential economic slowdown in the US mean there is no guarantee of consistent investor demand for risky assets, says S&P.

US companies have $3 trillion of rated debt that will mature by the end of 2016. "Given the robust volume of issuance over the past two years, there likely is sufficient liquidity and investor demand to refinance the looming debt obligations," S&P says. Low-rated companies will face the biggest challenge in refinancing.

Investment-grade companies issued a record $75 billion of debt in July, as interest rates on treasury bonds continued to decline. Yields on high-yield debt have also declined, with Barclays index falling to 6.6% in early August, close to its all-time low.

Overall global debt capital market issuance declined 7% in the first half, owing to European market uncertainty, according to Thomson Reuters. J.P. Morgan topped the global debt league tables, because of its strength in corporate debt underwriting. Barclays was second, followed by Deutsche Bank. 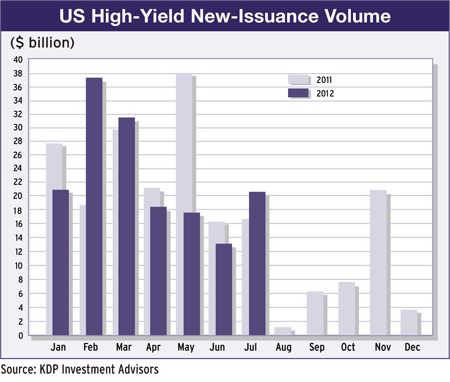 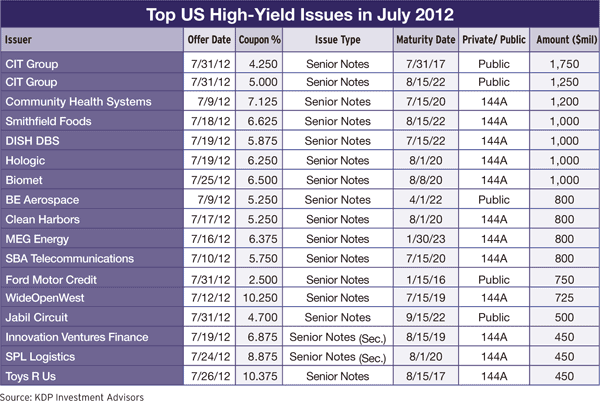