The global pipeline of initial public offerings has reached near-record levels, but IPO issuance and proceeds declined substantially in the second quarter of 2012.

Deal activity declined 52% and proceeds fell 36% in the second quarter from the same period a year earlier, according to Renaissance Capital.

The thumbs-down performance of Facebook's $16 billion offering, the seventh-largest IPO ever, and a slowing Chinese economy, combined with worries about European debt, derailed the market in the second quarter. "The global IPO market will need an improvement in overall market conditions to get back on track," Renaissance Capital says in its review of second-quarter IPO activity.

The Hong Kong Exchange listed only three IPOs larger than $100 million in the second quarter. Tightened regulatory procedures for public companies, as well as the slowdown in China, were largely to blame.

Some 322 companies are looking to raise a total of $194 billion in IPOs by the end of this year, Renaissance Capital says. Among the bigger deals in the pipeline, Japan Airlines announced plans to raise about $8.5 billion, and People's Insurance of China could issue up to $4 billion of shares in Hong Kong.

The Tokyo Stock Exchange approved a relisting of Japan Airlines' shares less than three years after the former national flag carrier filed for bankruptcy protection with more than $25 billion in debt. Daiwa Securities was named as global coordinator for the sale by Japan's state-backed turnaround fund. Japan Airlines has emerged from its restructuring as one of the most profitable airlines in the world, thanks in part to tax breaks, as well as workforce reductions.

Domestic retail investors seeking discounts on future JAL flights are expected to purchase the majority of the airline's shares, with 25% allocated to overseas buyers. If they hold on to their shares for three years, individual buyers could qualify for discounts of 50% off some ticket prices.

China's People's Insurance received regulatory approval to list in Hong Kong, but dropped plans for a simultaneous offering in Shanghai. The Hong Kong IPO was originally planned for July but was postponed owing to weak market conditions.

There were few IPOs from Europe or the Middle East in the second quarter, but those that did make it to market performed well. Italian fashion firm Brunello Cucinelli rose 45% from its IPO price, and Saudi cement producer Najran Cement more than doubled from its offering price on the Dubai Financial Market, according to Renaissance Capital.

Technology was the best-performing sector in the global IPO market in the second quarter, led by Chinese Internet news and media platform People.Cn, which rose 102% from its offering price.

Manchester United, the British soccer club, failed to excite investors with its debut August 10 on the New York Stock Exchange. The team's shares were priced at $14, which was below an initial estimated range of $16 to $20 a share. After opening at $14.05, the stock closed its first day of trading at $14.

Less than $1.25 billion in capital was raised in the form of depositary shares in the first six months of 2012, according to BNY Mellon. That was a steep decline from the $14 billion raised in DR form in the first half of 2011. Bancolombia had the biggest DR capital-raising issue in the first half, a $306 million secondary offering on the NYSE.

DR trading volume and values declined in the first half from the same period a year earlier, partly affected by global economic turbulence. 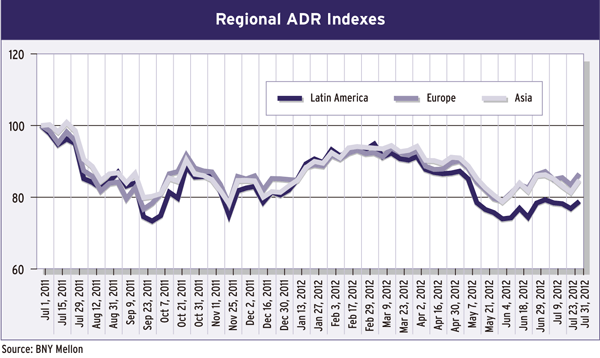