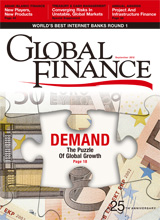 In the Western world, September is synonymous with the beginning of the school year, and represents the resumption of full economic activity after summer vacation. This year it is also a time of uncertainty on both the political and economic fronts. To the economic turmoil in Europe—which is starting to be accompanied by downtrend and/or recession in many of the Continental countries—we can now add the major uncertainty of the outcome of US presidential elections in November. During this period, 60 days before elections, decision-makers often are reluctant to make any substantial policy commitments.

The last few months have also seen a slowdown in some key emerging markets economies, stemming from a drop in exports to industrialized nations. For this reason we chose to focus our cover story on the issue of “demand.” Our goal is to look at where it could come from in the near future, given the slowdown and limited domestic demand in some of the largest emerging economies—such as India and China.

It is too early for a definite answer, but it is time to put forth the question. It is evident that large emerging economies that, until recently, had double-digit growth, do not operate in a vacuum and cannot, in a short time frame, substitute internal demand for exports. We are not necessarily believers in the “perfect storm” theory that fears, or even expects, all this uncertainty to coalesce in a worldwide crisis. But we clearly see increasing risks of contagion between different geographical areas in what amounts to the swinging of a pendulum for the global economy. There has been an excessive tendency to rely on BRIC growth to counterbalance the slowdown of mature economies, but globalization has indeed strengthened the interdependence of different economic areas of the world.

But regardless, companies still need to deal with treasury and cash management issues, banks need to innovate both for corporate and retail customers, and funding for project finance and infrastructure is in high demand. Thus, the stories in this issue of GF present the other side of the equation. Even in times of uncertainty the show must go on.