A favorable ruling by Germany's constitutional court on the legitimacy of the eurozone's permanent bailout fund, and coordinated easing by global central banks are both needed to ease concerns about Europe's debt crisis, analysts said.

As the euro and the dollar held to well-worn trading ranges in late summer, analysts were reluctant to predict the direction of the major currencies once trading returns to more active levels this month. "There are too many variables," says Dean Popplewell, chief currency strategist at Oanda, which provides online foreign exchange trading and currency information services. "The market is getting no direction from anybody."

ECB president Mario Draghi made it clear that it was their job to tackle the high borrowing costs now faced by Spain and Italy, pledging: "Within our mandate, the ECB is ready to do whatever it takes to preserve the euro. And believe me, it will be enough." Market players were disappointed, however, when the ECB failed to follow up on those strong words with a rate cut or bond buying to lower unsustainable yields on Spanish and Italian sovereign debt.

Following the German Federal Constitutional Court ruling, due on September 12, there will be another round of crisis meetings, Popplewell says. The ECB will start buying bonds of peripheral EU countries only if governments activate the bailout funds. "The million-dollar question is how aggressive the bond buying will have to be in order for it to significantly reduce yields," Popplewell says.

Another unknown facing the market is whether or not Spain will officially seek a sovereign bailout, he says. "This could have a large impact on the market, and I think it is only a matter of time," he adds.

Meanwhile, the seriousness of central banks in moving to offset weakness in the global economy caused by Europe's problems will be an important consideration. If there is enough coordinated easing, this could increase risk appetite of investors and boost equity markets, Popplewell says.

The Federal Reserve does not want to take the lead in a crisis that is centered in Europe, Popplewell says. Nor does the Fed want to be seen as taking sides in the US presidential election, he adds, so if it doesn't ease in September, it won't act in October.

Use of the euro is much, stronger than generally acknowledged and despite the threat of the currency union collapsing, Draghi says the euro is "irreversible." The ECB has made some decisions regarding Greece that clearly indicate it does not want to push Greece out of the monetary union, says Marc Chandler, global head of currency strategy at Brown Brothers Harriman. "It [the ECB] has gone so far as to essentially allow the Bank of Greece to fund the Greek government," he says.

The ECB approved lifting the cap on the amount of Greek treasury bills the Bank of Greece can accept from Greek banks as collateral for lending under the emergency liquidity assistance program. This will allow the Greek government to service its near-term debt obligations by issuing T-bills. The country's banks will be the main buyers of those T-bills and likely will use them as collateral for new borrowing under the Emergency Liquidity Assistance.

"It is not immediately clear how long this fudge can last," Chandler says. However, if the limit on the amount of T-bills that the ECB allows the Greek central bank to accept as collateral from Greek banks is approached, it seems reasonable to assume that the ECB will simply lift the ceiling again, he says.

There seems to be reluctance on the part of the ECB to squeeze Greece to the point of forcing it out of the monetary union, Chandler says. "We, like many, are concerned that if Greece is forced out, it would increase rather than diminish the risk that others are forced out as well," he says. "Moreover, given the imbalances, unfathomable indirect impacts and other unknowns, it may very well be the case that it is cheaper to keep Greece on life support than to pull the plug." A Greek exit wouldn't make it any easier to address the larger problems in Spain and Italy, Chandler says.

Disappointing Chinese economic data have renewed fears that the world's second-largest economy has not yet hit bottom, and the renewed anxiety has encouraged risk-off trades, Chandler says. The weak data have increased pressure on the Chinese central bank to cut interest rates again. "The lack of action from either the Fed or the ECB stands in stark contrast with their dour economic assessments," Chandler says. "The assessments and action will be brought into line, but not as soon as investors want."

Market sentiment has been dominated this summer by the European debt crisis and the "soft patch" in the US economy, says Michael Woolfolk, managing director of BNY Mellon Global Markets. "Further improvement in consumer confidence will be strongly dependent on the direction of the Dow [Jones Industrials Average] and continued decline in the [US] unemployment rate," Woolfolk says. "Any further setbacks will be met with a disproportionately sharp decline in confidence—whether or not it is fully justified on a fundamental basis." He notes that as a safe-haven currency, the dollar would continue to rally on growing pessimism.

FLIGHT OF THE BUMBLEBEE

The ECB's Draghi says: "The euro was a bumblebee that flew very well for several years. Now it has to graduate to a real bee." All leaders of the 27 countries of Europe, including the UK, agreed at their last summit that the only way out of the present crisis is to have more Europe, not less Europe, according to Draghi.

The Levy Economics Institute of Bard College in New York says in a new study that efforts to address the euro crisis thus far have been inconsistent and inadequate. The European Monetary Union has a fatal design flow in its structure: the attempt to separate fiscal policy from a sovereign currency, the study says.

When individual nations joined the EMU, they essentially adopted a foreign currency but retained responsibility for their nation's fiscal policy and banking system, it says. What is needed, it adds, is an unlimited deposit-insurance system to back up all euro deposits in the banks of all EMU members. 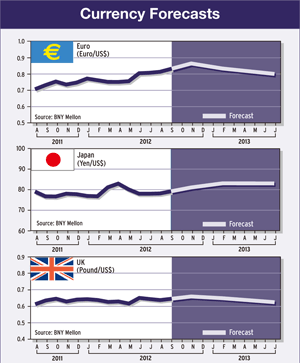 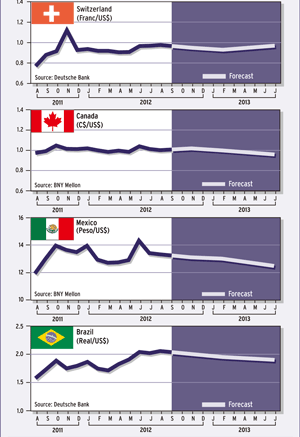 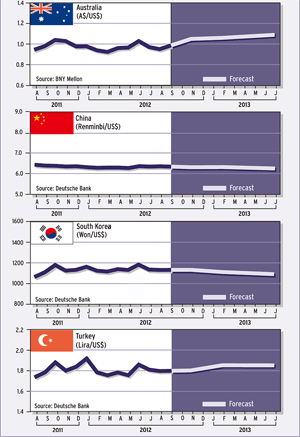