Agribusiness is increasingly being viewed as a dynamic area to invest in. But as global demand for food supplies and land increases, can banks, often criticized for their short-term outlook, meet the industry’s long-term financing challenges? 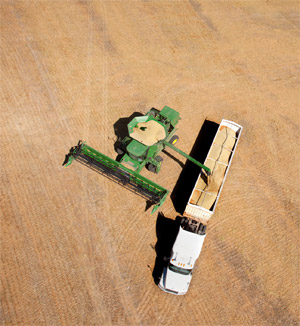 This has been a year of record-breaking weather, with midwestern America enduring weeks of more than 38-degree-Celsius temperatures at the height of the growing season. The soybean belt in South America suffered record drought, and Northern Europe was hit by record rainfall. The result: smaller-than-expected harvests, putting further upward pressure on already high food prices. But this year of topsy-turvy weather has perversely been good news for agribusiness, as it is likely to encourage further investment in what is now perhaps the world’s biggest growth industry.

“I used to work in the steel industry, which was all about scaling down,” says Martin Richenhagen, chairman and CEO of Agco, one of the world’s biggest farm equipment makers and a major player in the global agribusiness industry. “My experience here has been quite the opposite. Our problems are all growth-related ones.” Agco’s profit figures tell some of the story. Last year it reported net sales of $8.8 billion. This year it is expecting sales of $10.3 billion. Although second-quarter net income rose 54%, the figure is actually slightly lower than expected because of the drought, which will affect US farm incomes.

Agco’s performance over the past decade has, like that of most of the agribusiness industry generally, been one of the strongest in its history, with 2009 the only year in which sales dropped. New services, including grain storage, handling and distribution; new markets, notably Africa but also the former Soviet Union; and new products, including sugar cane harvesters-needed because of the rising demand for ethanol and the fact that burning sugar cane is generally illegal-have all supported performance. Some private equity firms and banks are belatedly waking up to the sector’s growth potential.

“Agribusiness is increasingly seen as a dynamic area to invest in, whereas a few years ago it was seen as old-fashioned and rather boring,” says Richenhagen. According to Carel van der Hamsvoort, global head of Rabobank’s Food and Agribusiness Research and Advisory group, today’s high-price environment has its foundations in the 1975–1995 period, when most grains and seeds were in oversupply and prices were low. The resulting underinvestment in all areas and low levels of R&D gradually gave way to an era characterized by the development of new techniques and more efficient uses of land and chemicals.

The industry is also being sustained by at least three big drivers that show no sign of slowing anytime soon. The first is the world’s fast-growing population, with the seven billion mark reached last October and eight billion anticipated by 2025. The second driver is rising incomes, leading to a demand for a more diversified, protein-rich diet—one incorporating more meat, chicken and other products, each of which requires substantially more inputs than grains (beef, for example, requires eight times as much input). The third driver, growing demand for alternative, grain-based fuels such as ethanol, has led to further pressure on supplies: Some 50% of the fuel used by vehicles in Brazil is now ethanol-based, with chemical companies and other big fuel consumers also looking to boost their use of nonfossil fuels.

“We could feed two times the world’s population in 2050 on a European diet, but we need to create and develop an enabling environment, with a special focus on such areas as infrastructure and credit availability,” argues Hamsvoort.

Despite strong demand, the industry faces many challenges. Agco’s Richenhagen says one of the biggest is bottlenecks in the supply chain, with inputs such as hydraulics, tires and engines all in undersupply as producers fail to keep up with demand and changing specifications. This is especially the case in the countries and regions with the biggest growth potential, such as Russia, Ukraine, Kazakhstan and Africa. There is also a shortage of human resources talent, particularly in engineering and R&D.

The biggest shortfall, however, may be finance. Historically Rabobank, ANZ, Crédit Agricole, Standard Bank (South Africa) and the Kent Group were among the institutions financing the industry, along with private equity firms. But with demand growing and the needs of the agribusiness sector changing to meet it, there are real concerns about whether the banking sector—focusing, as it does, on the short term—can rise sufficiently to meet the challenges, which are long-term and unquantifiable. The problem is even more acute because where the most agribusiness potential lies and where financing needs are greatest—within Africa and the former Soviet Union, for example—are precisely where finance is scarcest.

International financial institutions are stepping in. The European Bank for Reconstruction and Development currently has some 383 agribusiness projects under way, with a total value of $13.6 billion. Last year was its third record-breaking year in a row, with $945 million in new investments. EBRD agribusiness director Gilles Mettetal dates the pickup in business to 2008, when a meeting held jointly with the UNFAO (Food and Agriculture Organization of the United Nations) sought to identify what could be done to boost production in Russia, Kazakhstan and Ukraine. The latter was once known as the “breadbasket of the USSR” and is famed for its fertile black soil—chernozem—but has since fallen behind in realizing this potential despite good access to the sea (and export markets) and increasingly entrepreneurial attitudes. “Simply by utilizing unused land, these countries could raise production to an amount equal to half the world’s grain production today,” Mettetal says. “Only the private sector can do this. Yet long-term financing can be hard [to come by].”

The amount needed is considerable: To finance development of unused lands in Ukraine, for example, would take about $80 billion in investment, given Ukraine’s 40 million hectares. The EBRD has already invested $5.4 billion-with some notable successes, including its involvement with Nibulon, Ukraine’s leading agribusiness firm, which is rebuilding much of the old Tzarist-era infrastructure along the River Dnieper. In late July the EBRD extended the company a syndicated loan facility worth $130 million. But it is all just a drop in the bucket.

Vertical integration is one way forward for agribusiness companies, so factories and storage facilities can be used as collateral. The EBRD is also devising a new way of enabling farmers to use grain as collateral by providing warehousing—which means they don’t have to sell their grain immediately when it is in oversupply—and issuing depositary notes, which lenders can then accept as guarantees. The bank is providing credit lines to banks in southeastern Europe and the CIS, so they can lend to farmers against the depositary receipts.

"Large banks haven’t tended to focus on agribusiness, but after all the recent scandals, I see this changing"

One thing is clear: With banks widely held in contempt for their short-termism but also scrabbling for new, profitable business in the midst of one of the worst recessions recorded, agribusiness could be a new way forward. “Large banks haven’t tended to focus on agribusiness, but after all the recent scandals, I see this changing,” says Agco’s Richenhagen.