Mongolia is struggling to find the right path in making use of abundant resources to improve the lives of its citizens, while providing a stable and fair business environment for investors.

Mongolia has in recent years been the darling of frontier markets investors. It sits on huge and largely underdeveloped reserves of minerals, principally copper, gold and coal. The economy has been growing at double-digit rates since the short recession that followed the global financial crisis. In global league tables on governance, transparency and ease of doing business, Mongolia does much better than most resource-rich nations. No wonder it has been a magnet to investors. 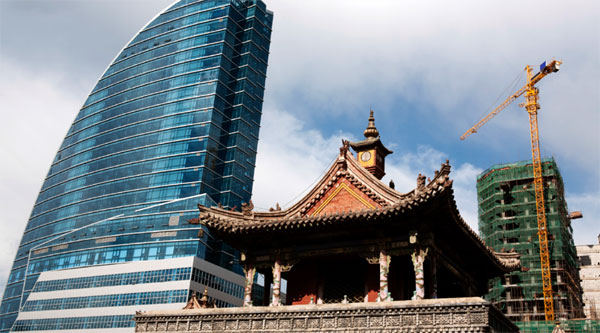 The main engine of growth is mining, such as the $6.6 billion giant Oyu Tolgoi copper and gold mine in the Gobi Desert, which ranks among the five largest copper mines in the world. GDP growth peaked at 20.2% year-on-year in the fourth quarter of 2011. Last year it was down to 12.3%—but that still makes Mongolia one of the world’s fastest-growing economies. Construction has been booming, and property prices in the capital, Ulaanbaatar, have skyrocketed as foreign mining companies, financiers and consultants have poured in, provoking concerns about a bubble and the solidity of some local banks, with Moody’s recently putting the banking sector on negative outlook.

Mongolia is unlike most developing countries, both in its geography and its politics. A vast, landlocked country inhabited by less than three million people—most of whom were nomadic herders a generation ago—it has the world’s second-lowest population density after Greenland. It is home to a vibrant democracy.

Following this year’s closely fought presidential contest, the incumbent, Tsakhia Elbegdorj, only just scraped through the first round of the June elections with a 50.9% majority. His two challengers were a former wrestling champion and the Health minister, who is also the first woman to run for the presidency.

All three candidates embraced different versions of “resource nationalism”—the widely held sentiment that the larger share of Mongolia’s natural wealth should go to Mongolians and not foreign investors. Combine that with a deep-seated fear of being absorbed by China—as happened to Inner Mongolia—through Chinese ownership of mining rights and local businesses, dominance of trade and the growing number of illegal migrants, and you have a potentially explosive mixture. Such fears lay behind Mongolia’s Investment Law, passed last year, imposing a 50% cap on foreign investments in strategic industries such as mining, banking and telecommunications. But this law was so broadly framed that it has deterred investors. FDI fell by 17% in 2012 and by 58% early this year, according to the Bank of Mongolia.

The government, as a 34% shareholder in the Oyu Tolgai copper mine, has also sought to renegotiate terms with Rio Tinto’s subsidiary Turquoise Hill Resources, which holds 66%, citing cost overruns, while also seeking a larger role in management. Negotiations have been tortuous and have delayed shipments of copper concentrate to China three times. Given that this one mine accounts for more than 20% of Mongolia’s total economic activity and could provide the government with $2 million a day in royalties and taxes, the standoff has proved costly.

Shipments finally started in July, though full agreement on many points has still to be reached. All this has sent negative messages to other investors. And while parliament is moving to changing the law on investment in strategic industries, continuing legal uncertainty has curtailed exploration and caused existing projects to be scaled down. However, “the debate on how to amend the law is now going forward,” according Alex Plekhanov, a former senior economist at the European Bank for Reconstruction and Development and former country economist for Mongolia, where the bank has been active since 2006. “One of the possibilities,” he says, “is to preserve the idea of strategic industries but to provide equal treatment for foreign and domestic investors.”

Factors beyond government control—softer global commodities prices and slower growth in its key export market, China, are also having a negative impact. But some wounds are self-inflicted: Coal exports fell by 43% in the first quarter of 2013, after the state-owned operator of the huge Tavan Tolgoi coal deposit halted shipments because it was unable to pay a warehousing company. After renegotiating a loan and contract with its main customer, Chalco, Tavan Tolgio has resumed shipments.

The World Bank has trimmed back this year’s GDP growth forecast from 16.2% to 13%, and further downward revisions are likely. Foreign trade to mid-July was down 7.3% over the same period last year, with a drop in exports of 9.1% and imports shrinking by 6.2%, according to the National Statistics Office of Mongolia. Analysts at Mongolian Investment Banking Group see this pointing to an “an overall weakening of the economy,” while “the decrease in imports of diesel fuel along with heavy machinery indicates that mining and exploration activity has slowed.”

Last November Mongolia tapped international capital markets for the first time with its $1.5 billion Chinggis bond. “Mongolia achieved a spectacularly good rate which compares favorably with sovereign issuers in Southern Europe,” observes Plekhanov. “But now, with the government continuing to run a very large fiscal deficit and the economy slowing, issuance on such favorable terms would be next to impossible.”

Plekhanov says the deficit is owing to “political pressures to spend more on top of already-high spending—not only on social causes, like education and housing, but also on cash handouts to Mongolian citizens. It was very front-loaded and based on projected mining revenues. Basically, it was decided to hand out money that was still in the ground.” Such public largesse, he says, “was reined in after last year’s parliamentary elections, with monthly cash handouts now limited to minors.” But there remains a long list of infrastructure projects, including paved roads linking regions to the capital, which “probably owe as much to pressures from parliamentary constituencies as to objective needs.”

Some measures are being taken to make Mongolia a more attractive and diversified investment destination. A new Securities Law passed in May provides for dual listings on the Mongolian and foreign stock exchanges. As for avoiding the so-called resource curse, Plekhanov argues that “diversifying the economy away from natural resources depends on targeting sectors where it can be competitive. As a landlocked country, Mongolia faces serious challenges. Traditional Mongolian industries like cashmere require major investment in new technology.” And despite its huge coal reserves and potential for oil exploration, Mongolia remains dependent on imports of petroleum products.

Revenues from Mongolia’s copper and coal mines will enable more state-led development and infrastructure projects. But the country also needs foreign direct investment, both to expand its resources-driven economy and to partner in revenue-generating projects elsewhere. President Elbegdorj and the coalition government stand at a crossroads. Either they persist with a brand of resource nationalism that, though popular, threatens to kill the goose that laid the golden egg, or they refine the resource nationalism concept, define its limits and provide a degree of legal certainty that will bring back investors and underpin a more sustainable future. 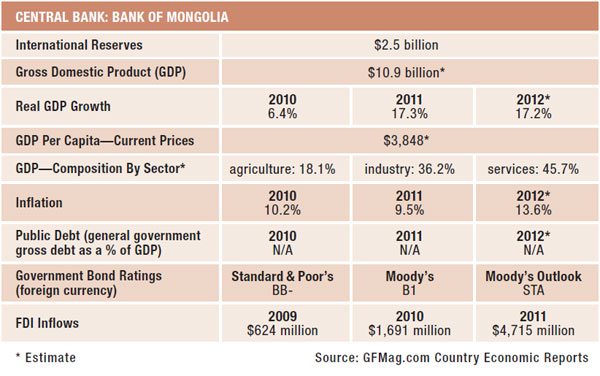