Editor's Letter: Changing Of The Guard? 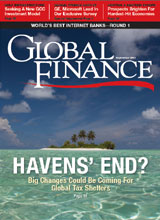 For the first time since 2007, advanced economies are contributing more to global growth than developing ones. The surprising data, presented recently by the Wall Street Journal on estimates from Bridgewater Associates, reflect increased growth in countries like the US, Canada and Japan and a slowdown in emerging powers like Brazil, China and India. If these trends persist, it will be interesting to see what the political consequences will be on the agenda of multilateral agencies like the World Bank and the International Monetary Fund. One sign of change is the controversy raised by the Brazilian representative at the IMF over the latest Greek bailout. Brazil’s criticism could signal a change of attitude among emerging economies on the issue of financial aid to Western countries and IMF-member burden sharing. For a while now the BRICs have been demanding greater say in IMF and World Bank policy-making, and this could be a further push in that direction.

Another sign of change comes from Europe with the upcoming parliamentary elections in Germany. Given Germany’s leadership role in Europe, it is not surprising that a few serious decisions at the European Commission and the European Central Bank have been put on hold, waiting for the verdict of the German electors.

Last, but not least, globalization has reached the central bank governor’s office. While the US is looking for a successor to Ben Bernanke, the UK has imported a central bank governor from Canada, Israel is considering a former CB governor of Argentina, and other cross-border acquisitions have been rumored. It shows that, as in professional sports, there is global demand for the best performers.

In this issue we present our first-ever ranking of the Global Finance Cash 25—the top global public companies by cash on balance sheet. The survey is significant not only for its scope but also as it highlights that not all companies with large cash reserves are household names in their home markets. Coincidentally, our cover story focuses on efforts to regulate and control global tax havens, and the results of our cash survey bear out the fact that companies often keep cash piles in different countries to avoid unfavorable taxation in domestic markets.