The Federal Reserve is expected to gradually cut back on its bond purchases, becoming the first of the major central banks to do so. The divergence in US monetary policy from those of Europe and Japan will lend support to the dollar, according to analysts.

Marc Chandler, global head of currency strategy at Brown Brothers Harriman, says the Fed is in no hurry to end its accommodative monetary policy, and it could gain more inflation-fighting prowess by waiting until a new central bank chairman is in place next year—Ben Bernanke is widely expected to step down as Fed chairman when his second term is completed at the end of January 2014—before pulling back from its full-throttle ease. He notes: “Our longer-term bullish dollar outlook has not been impacted by the near-term volatility or the possibility that the Fed’s exit strategy is more prolonged than the market had come to anticipate.”

The Fed would benefit from allowing its next head of the Fed to handle policy adjustments for tapering and thereby establish anti-inflation credentials that may be important in the coming years, Chandler says. “That credential would be wasted on Bernanke, who will go down in history for using unconventional policies to ensure monetary policy was sufficiently accommodative to prevent the Great Recession from turning into another Great Depression.”

Michael Gaspen, director of US economics research and global asset allocation at Barclays, says Bernanke emphasized in his recent congressional testimony that policy decisions would be contingent on economic outcomes. Bernanke said that if economic activity strengthens, as the Federal Open Market Committee (FOMC) expects, then the Fed will likely slow the pace of purchases later this year and conclude its purchases around the middle of 2014.

“Our view is that structural demographic factors will prevent the [labor force] participation rate from rising and that the unemployment rate will continue to fall faster than the committee expects,” Gaspen says. “If our forecast proves accurate, we envision inflation being firm enough to permit gradual increases in the federal funds rate in the first quarter of 2015.”

Barclays maintained its forecast for a weaker yen following Japan’s upper house elections, which ended with a victory for prime minister Shinzo Abe’s ruling Liberal Democratic Party in coalition with the New Komeito Party. However, the LDP fell short of securing a single-party majority.

The coalition victory means that the Japanese government is arguably the strongest among the major countries and makes it even more difficult to challenge Abenomics, says Chandler. “This is generally perceived to be positive for Japanese shares and negative for the yen.”

Alistair Cotton, senior analyst at Currencies Direct, a London FX broker and international payments provider, adds that the election results are very good news for Japan. “This gives the Japanese government three years to enact changes without the potential of another election being called.”

The Japanese electorate sees no real alternative to Abenomics, Cotton says: “The public doesn’t want 20 years of stagnation. However, it will take the best part of three years for Abe to accomplish his goals, so the yen will continue to grind lower.” Japan has to be careful not to allow the yen to fall too quickly, or it could trigger inflation and have a deleterious effect on the country’s huge government bond market, he notes.

Meanwhile, the euro remained resilient, even as Portugal’s political and economic problems made it clear that troubles in the eurozone have not gone away. Opposition to austerity is increasing in Portugal at the same time that the government plans further spending cuts. “The problems in Portugal and the corruption scandal in Spain would normally be a big deal, but there hasn’t been that much media coverage,” Cotton says. “There is more confidence in Europe now, amid an apparent political will to hold things together.”

The financial markets worldwide overreacted to the Fed’s initial hints in June that it was considering tapering its bond purchases, according to Cotton. US bond yields rose sharply and stock markets plunged. Emerging markets such as Brazil and Turkey struggled with massive fund outflows, he notes. “Now that the Fed has backtracked in a big way, the markets have calmed down and are starting to react to economic fundamentals once again,” Cotton says. “Investors have realized that the Fed’s intentions to take its foot off the accelerator is not the same as the Fed slamming on the brakes. The Fed is going to keep its easy monetary policy going forward,” he says.

Mark Carney, the newly installed governor of the Bank of England, said on August 7 that the UK central bank would not consider increasing its record-low interest rates or tapering its bond purchases until the country’s unemployment rate falls below 7% from its current level of 7.8%. Carney, the former governor of the Bank of Canada, said: “Our biggest concern is the possibility that, as the recovery gathers pace, there is an unwarranted change in expectations about the pace of withdrawal of monetary policy stimulus.” 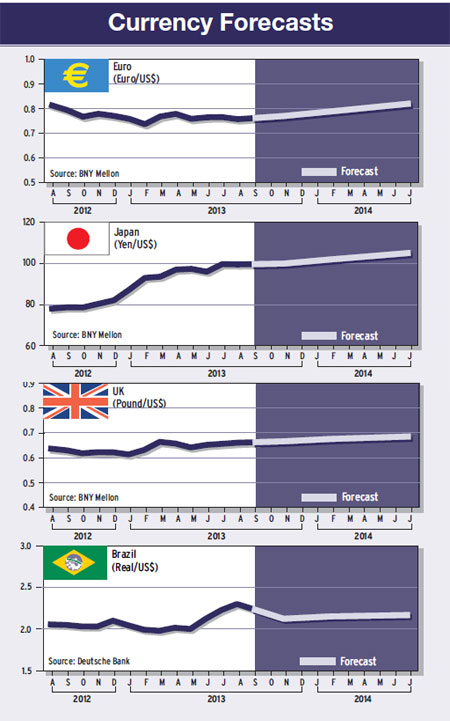 Richard Cochinos, head of Americas G10 foreign exchange strategy at Citi, notes that there is no change in monetary policies of the major central banks for the time being. “The Fed is still engaged in quantitative easing, and Japan’s stimulus has been largely unchanged from April onward. The Bank of England and the European Central Bank are not actively adjusting their policies but could decide to stimulate growth in their economies in the future.” The upcoming federal election in Germany on September 22 could be one reason the European markets are somewhat quiet, according to Cochinos.

The differences in monetary policies will become clear in the next six to eight months, Cochinos believes. The FOMC could announce the beginning of tapering at its September 16-17 meeting. “It depends on the economy,” Cochinos says. “The Fed has two mandates: price stability and full employment, which is taken to mean 2% consumer price inflation with stable inflation expectations and an unemployment rate of 5.5%.”

Mark Frey, chief market strategist at Cambridge Mercantile Group in Vancouver, says the removal of monetary stimulus by the Fed at some stage could create a cash squeeze because there will be fewer dollars changing hands. “We are just starting to see some interest-rate divergence.”

The dollar’s potential to rise could be limited to around 5% in the next 12 months, Frey notes. “We will see more volatility as well.” Frey adds that the commodities supercycle is over and there will be further worry about the slowdown in China. That could bode ill for the Canadian dollar. “Oil runs the Canadian dollar,” Frey says.