The global market for initial public offerings continued at a quick pace in early August, led by the US and the Asia-Pacific region, according to Renaissance Capital. Sprouts Farmers Market, which operates more than 160 natural and organic grocery stores in the southwestern US, soared 123% in its August 1 market debut, for the best first-day gain of the year to date.

Despite a weak performance from emerging markets IPOs, global IPOs managed a 6.7% average return in the second quarter. The quarter had 10 IPOs of more than $1 billion, which was the highest in more than two years, Renaissance Capital notes. Henri Leveque, leader of PwC’s US capital markets and accounting advisory services, says IPO activity in the US rose substantially in the second quarter, bolstered by early gains in a strong but volatile equity market and an increased appetite for risk from investors. “We are also continuing to see a broadening of sectors represented in the IPO market, especially growth-related offerings in sectors that are well positioned to capitalize on a recovering economy.”

In its quarterly survey of IPOs listed on US stock exchanges, PwC said that it is optimistic about the health of the market for the remainder of 2013. The financial services sector led IPO volume in the US in the second quarter, followed by the technology and healthcare sectors.

The Asia-Pacific region led global IPO issuance volume in the second quarter, accounting for 38.4% of IPO proceeds, despite the lingering shutdown of the Chinese A-share market, according to Renaissance Capital. In addition to the return of IPOs to the Hong Kong Exchange in the quarter, other historically less active exchanges in the region raised significant proceeds. The Tokyo Stock Exchange raised $3.9 billion in the second quarter, and the Stock Exchange of Thailand raised $2.3 billion.

The US had nine of the 10 best-performing global IPOs in the second quarter, while Asia-Pacific was the weakest region, with a decline of 7.7%, owing to the poor performance of emerging markets, according to Renaissance Capital.

The World Federation of Exchanges said in its semiannual survey of global markets that the value of share trading on its member exchanges had risen by 23% in the first half of 2013, while the volume of exchange-traded derivatives had increased 14% from the same period a year earlier.

In the depositary receipt market, J.P. Morgan created an American depositary shares program on the New York Stock Exchange for Graña y Montero, the largest engineering and construction company in Peru, in connection with the company’s IPO. The company raised $413 million and plans to invest 60% of the proceeds in infrastructure projects; it will also use 20% for potential acquisitions, 10% for real-estate purchases and the remainder for general corporate purposes. 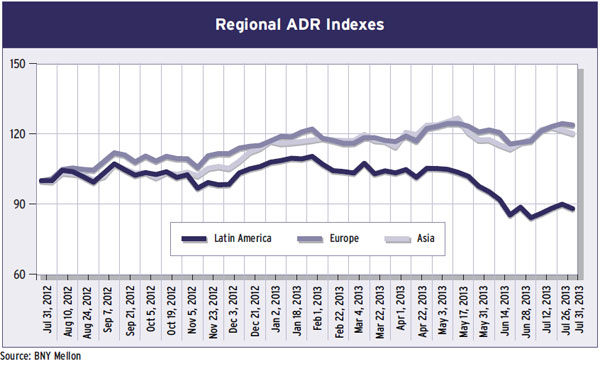