Central and Eastern European countries are quite diverse in their performance of late. However, investors continue to lump them together when it comes to investments. 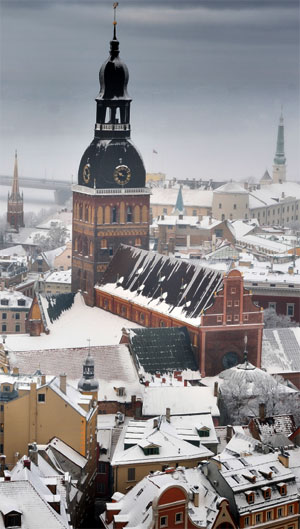 European integration got two big boosts in July: Latvia joined the much-maligned eurozone, and Croatia became the European Union’s 28th full member. For those following emerging Europe’s efforts to recover from the global crisis, however, the difference in these countries’ recent economic performances is more interesting than their respective accessions.

Like its Baltic neighbor Estonia, Latvia has been something of a star. It enjoyed an intense period of economic growth between 2000 and 2008. According to Charlie Robertson, global chief economist at Renaissance Capital, per capita GDP rose from around $2000 to $10,000. When the 2008 downturn hit, moreover, Latvia bit the bullet. Riga went further than any other European country in implementing structural and other reforms that dramatically deepened the recession but also laid the base for subsequent recovery. Latvia restored public finances and financial stability to make eurozone membership possible. Today, although wage levels and living standards are down with respect to 2008, the picture remains positive, with per capita GDP around $7000 and GDP expected to grow this year by 4.2%, according to the IMF, after 5.6% growth in 2012.

Croatia, by contrast, despite being subjected to much closer scrutiny than other accession countries (owing to Romania and Bulgaria’s being insufficiently reformed when they joined the EU in 2007), has been a reform laggard. Its politicians failed to carry out much-needed public-sector, legal and labor market reforms and botched privatization, so the country fell behind. According to Gunter Deuber, head of CEE research at Raiffeisen Bank International, uncompetitive Croatia has underperformed Greece, Italy, Spain and Portugal since 2008. With unemployment at around 20% (youth unemployment is near 50%) and GDP this year expected to contract by 0.2%, the only way Croatia can fully benefit from EU accession, Deuber says, is through modernization and deep-seated structural reform. Although it will receive a large influx of EU funds, high local costs and a difficult business environment will slow investment and modernization: Little wonder the country places 84th out of 185 countries in the World Bank’s latest Ease of Doing Business survey.

Other close observers of the region echo this. “Croatia is still suffering from the legacy of large state involvement in the economy… They have a lot of work to do,” says William Jackson, emerging markets economist at Capital Economics, a London-based consultancy.

With investors leery of emerging markets generally—and with reform laggards such as Croatia adding to the risk fears—emerging European countries are finding it hard to attract much-needed FDI. This is the situation facing such countries as Romania, which in April shelved plans to join the eurozone by 2015, admitting that although it had made progress toward accession requirements—including cutting the public deficit to below 3% of GDP—membership was impossible until at least 2020. Pointing to the slowness to privatize and improve competitiveness, president Traian Băsescu admitted that premature membership “could end in failure.” Although the country is beginning to pick up again, local bank nonperforming loans (NPLs) are around 20%—only Albania, with 23%, has a higher ratio—suggesting the path to full recovery is potholed.

“Countries across the region were badly hit by the [global financial] crisis, which exposed problems that hadn’t really been tackled during the boom years, when countries like Romania were enjoying growth rates of around 7% a year,” says Peter Sanfey, senior economist at the European Bank for Reconstruction and Development (EBRD).

Even more developed CEE countries face big challenges. Sanfey’s colleague, EBRD chief economist Erik Berglöf, speaks of the risk of countries’ being stuck in transition, with many now at income levels historically associated with a natural slowdown in growth. “[The CEE region] underwent a transformation from a capital-intensive economic structure to a more market-oriented model. Many countries have now eliminated this productivity gap and are unlikely to sustain the same pace of productivity growth,” he says.

Russia is similarly expected to see a slowdown in growth. Going forward, it is expected to grow at some 3% a year against the previous 5%, owing to a decrease in investment, much of that the result of the failure of the non-oil economy to evolve. Across the Central European/Baltic region, GDP is expected to increase by 0.8% this year—led mainly by the Baltics, with Latvia seeing growth of 3.5% to 4%—and to rise to 1.8% next. Southeastern Europe is predicted to grow 1.4% this year (after growth of just 0.4% last) before increasing to 2.2% next year, according to the EBRD. So, given a sluggish global recovery, what can emerging European countries do to maximize their growth as well as their appeal to investors?

There are limits, because of the region’s heavy economic links to the EU, where growth this year is forecast to contract 0.5%. Once the EU starts to recover, so too will emerging Europe’s prospects. And Capital Economics’ Jackson argues that countries with close links to Germany, the main driver of the EU economy, look better placed than those dependent on trade and investment from Italy or Greece—that is, most of the Balkan states. “In the short to medium term, this suggests the Czech Republic and Slovakia will be better bets than those with strong links to the Southern European states,” he says, adding that once again the Baltics will outperform the rest of region.

Analysts say, however, that all the countries can help themselves by focusing on reform of public institutions, of the labor market and the pension system, as well as—where applicable—concluding privatization in an efficient way that boosts competition and productivity within the economy.

Local banks are another sector policymakers should keep a close eye on. With most owned by Western European parents, many have seen strategic withdrawals of capital, as parents have struggled to reduce their NPL exposure. As a result of this strategy and the economic slowdown, credit conditions remain tight. Governments keen to boost growth can take steps to encourage saving—which remains low in many countries—and bank lending, as well as by promoting the emergence of a more sophisticated financial, nonbank sector. Bank consolidation should also follow, particularly in countries with small population and a large number of banks (like Croatia, with 4.4 million people but around 30 banks).

In the long term, though, investors can rest assured that once the eurozone crisis settles down and EU growth picks up, emerging Europe is a good bet. Countries likely to lead the way in recovery include the three Baltic States and Slovakia—which has outpaced its neighbor, the Czech Republic, despite the similarities of their economies. After cutting interest rates eight times this year to a record low of 2.5%, Poland also seems to have stabilized its economy. Inflation is at a record low of 0.5% (against expectations of 2.5%), and although GDP this year is predicted to grow by only 1.2%, it should rise to 2% next year. Even Hungary—which faces an election next year—seems to be slowly recovering: First-quarter GDP rose 0.7%, and Renaissance Capital reckons full-year growth of 1% this year and 2% next is possible, defying IMF and other predictions of flat or even slightly negative growth.

Analysts say you don’t have to look far to understand the region’s continuing appeal. Wage differentials, compared with Western Europe’s, remain huge: Manufacturing workers in Hungary or Poland get paid €7.5 an hour, and those in Romania, €4.4. Within the EU as currently constituted, the figure is €27 an hour.

“Not only are wages low—important for attracting FDI—so too are interest rates, whilst the currencies are cheap,” says Robertson. “This suggests growth should pick up in 2014 and in the years beyond.”