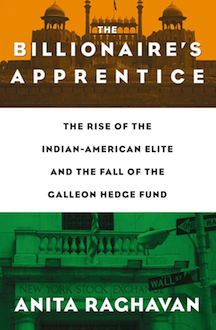 In a recent interview at the Asia Society, Anita Raghavan, author of the recently published The Billionaire's Apprentice: The Rise of the Indian-American Elite and the Fall of the Galleon Hedge Fund (Grand Central Publishing, 2013) admitted that the book was difficult to write. The Indian community resented the fact that she was examining the community and didn't cooperate as much as she might have hoped. And those who did wanted anonymity. Hence the wide lack of attribution in the book.

That should have been the tip-off. Missing in the introductory cast of characters are some key players in the drama. And their passing mention raises the question of whether the missing players are among Raghavan's "anonymous" sources or whether the author simply did not understand their significance.

At the insider trading trial of Raj Rajaratnam—the founder of hedge fund Galleon Capital—for example, money manager Parag Saxena of New Silk Route Partners was publicly mentioned as a "person of interest." Subsequently, Rajat Gupta, former managing director of McKinsey & Co and former Goldman Sachs board member—and one of the major protagonists of The Billionaire's Apprentice —sued Saxena for breach of contract. Yet Saxena gets only a passing mention. Considering that he settled charges of insider trading with the Securities and Exchange Commission on several occasions and played a key role–with current Goldman Sachs director Mark Schwartz—in the initial fundraising for Galleon and his own New Silk Route, is he not a bigger part of the story than the writer acknowledges?

Another character who receives only passing mention is Victor Menezes, the former senior vice chairman of Citigroup, former chairman and CEO of Citibank and senior advisor to New Silk Route who settled with the SEC on charges he sold Citibank shares before a key company announcement. According to those close to Rajaratnam, Menezes, Saxena, and Gupta were his "bosom buddies"—until they were not.

Raghavan is a veteran journalist, a writer for the Wall Street Journal and Forbes , and she has used the available material well. She has constructed a clear and compelling narrative out of the trials and the written material – email and letters – that was made available to her. But Simon Schama, the analytical British historian, she is not. And her attempt to present the stories of Raj Rajaratnam—a Sri Lankan—and Rajat Gupta—from the Bengali region in India—as part of a larger morality play of Indian-Americans is simply not convincing.

India is a complex mosaic. And over the last 2,500 years or so it has puzzled Indians and foreigners alike. In 326 BC, after defeating Porus in the battle of the Hydaspes River, Alexander the Great is said to have turned to Seleucus, his field commander, and remarked, "What a strange country. And what a strange group of people." Not much has changed since then.

Even Indians don't profess to understand contemporary India, with its 1.2 billion people, 28 states and more than 20 officially recognized languages. And Bengalis are an even more perplexing lot. Indeed, the 20th century independence movement that began with the partition of Bengal in 1905 ended with its repartitioning in 1947. Raghavan's attempt to place Rajat Gupta's actions in some "Bengali" constellation is impossible.

Sri Lanka is just as perplexing: An island nation that is now divided along religious and racial lines. For all of Rajaratnam's dealings in the US, he continued to be deeply involved in the Sri Lankan equity market, with investments in the very large financial companies John Keells Holdings and Lanka ORIX Securities and a host of other listed businesses. How much was the Sri Lankan market manipulated by Rajaratnam? And what have been the repercussions?

Suffice it to say that The Billionaire's Apprentice raises more questions than it answers.  Why did Preet Bharara, the US attorney who prosecuted the case, single out Galleon when it is widely known that the stock in trade of most hedge funds is "advance" information? Who are the investors in these funds and how significant were they in shaping Galleon's strategy? In many ways, Charles Gasparino's Circle of Friends: The Massive Crackdown Against Insider Trading–and Why the Markets Always Work Against the Little Guy , although highly opinionated and flawed, is a more compelling look into the world that Raghavan attempts to describe.

There is a story about Indians in America that has yet to be written–from the landing of the first Indians in 1893 on the western coastline of North America to the emergence of the Indian entrepreneur in Silicon Valley and along Route 128. There is a diasporic story as well–one that involves dynastic families such as the Tatas and the Birlas and the Sarabhais and emergent ones such as the Ambanis and the Hindujas. But that is for another day.

There also is another story about insider trading that Raghavan doesn't even touch. Who are the investors–the pension funds, the family offices and the wealthy individuals–who give their money to the Galleon's—and Steve Cohen's—SACs?

When then New York Mayor Edward Koch wanted to curb rampant prostitution in New York City, he didn't just go after the pimps and the prostitutes, he also went after the "johns." There are many who think that one way to curb insider trading isn't simply to punish the inside traders but also the "johns" who invest with them.

Read an excerpt of The Billionaire's Apprentice here:

The Billionaire's Apprentice: The Rise of the Indian-American Elite and the Fall of the Galleon Hedge Fund