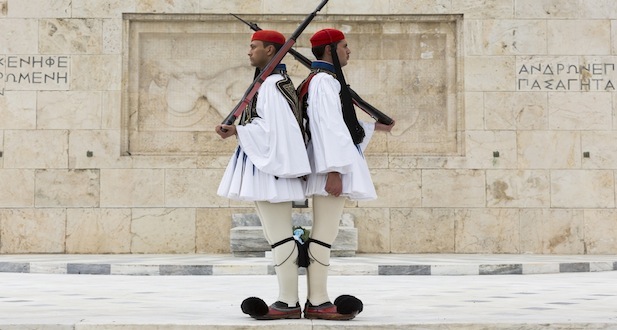 While the Greek economy remains too weak to meet the goals laid down in the current bailout package, a highly critical report by the IMF ( leaked to the Wall Street Journal ) concludes that the fund and its troika partners, the European Central Bank (ECB) and the European Commission, bungled the bailout because it was designed to save the euro rather than the debt-ridden Mediterranean nation.

The report goes on to criticize the two-year delay in restructuring Greece’s massive debt load. That restructuring was politically difficult for EU countries ( mainly Germany and France) whose banks held the majority of Greek bonds .

Equally damaging, the IMF admits it knew the debt was unsustainable as it did not fulfill three out of four criteria* to get an IMF loan , but they did it anyway to prevent contagion and has since added a “high risk of international systemic spillover” proviso.

Contagion is precisely what happened in Cyprus , which despite the swollen bank accounts of Russian oligarchs mainly got into difficulty as a result of its close ties to the Greek economy (two of the biggest Cypriot banks are among the largest holders of Greek bonds and have an extensive presence on the mainland).

Feeling backed into a corner the IMF report, both the European Commission and the ECB insist they have nothing to apologize for , citing the many unknowns, enormous risks and the lack of a eurozone safety net.

While the EU maintains a hardcore austerity line, the IMF and US recognize the need for growth and jobs . Fears that Greece could implode under the weight of austerity has led to a softening stance, with calls for additional relief measures.

American investigative journalist, economist and author Greg Palast goes further, insisting that austerity is killing Greece. “Austerity in the middle of a recession is a death sentence,” he says.

Greece is likely to use the IMF’s mea culpa to extract concessions, but if it is forced to accept another savage austerity program in exchange for another bailout, without growth, the consequences could be dire and the pain felt for many years.

By the IMF’s admission, the “program did not restore growth and regain market access as it had set out to do," and it seems likely that in the future the fund will demand greater losses for private creditors and more realistic growth and debt forecasts when it operates inside a monetary union.

2. There must be a determination, based on a rigorous and systematic analysis, that there is a high probability that the country’s debt burden will be sustainable.

3. The country must have good prospects of regaining access to private capital markets while IMF resources are outstanding.

4. The policy program must have reasonably strong prospects of success.