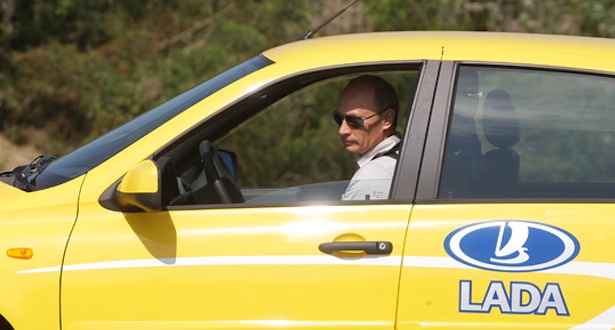 The tariffs are not only choking off the supply of nameplates from the EU, but are also damaging the Russian economy and those of the country’s closest trade partners in the former Soviet Union.

Indeed, just one year after joining the World Trade Organization Russia already finds itself entangled in a serious trade dispute.

The quarrel stems from a government decision to impose a sneaky “utilization fee” on imported motor vehicles, ostensibly to pay for the cost of recycling them. In reality the “green fee” is an import duty that signals to the rest of the world that Russia does not wish to engage in free trade on a level playing field.

So far, Moscow has dismissed an EU request for a special WTO panel to arbitrate the dispute, which is rooted in a 2005 decision to impose a 30% tariff on imported vehicles to give domestic producers like Lada a shot in the arm.

To avoid the import duty, foreign carmakers had to produce more than 350,000 vehicles a year in Russia. They also had to use 60% local content and establish local R&D operations.

It was a good plan—in theory. But after finally securing WTO membership, a process that started back in 1993, Putin unleashed his scrappage fee on imported vehicles. Disguised as an environmental tax, the charge effectively brought the import duty back to 30%.

The backlash from the EU was loud and immediate. To appease his critics Putin eventually passed a law, which goes into effect January 1, 2014, extending the controversial fee to domestic producers as well.

But this is a case of making a bad situation worse. So far, the move has done nothing to silence critics in the EU. They claim that Russia’s recycling program for cars is smoke and mirrors. They point out that the scrappage fee originally targeted only imported nameplates, and thus, the real intent of the duty was to protect Russian carmakers, not the environment.

Neighboring Ukraine, which has a small and fragile car industry, is getting slammed by the Kremlin’s eco-tax. Carmakers in that country claim the import duty is partly responsible for a 60% decline in automotive production this year.

Meanwhile, Russia’s Customs Union with some its former Soviet republics requires it to treat vehicles made in member countries as domestic. That means the scrappage fee will not only be slapped on domestic producer AvtoVAZ, maker of Lada cars in partnership with Renault-Nissan, but also vehicles made in Belarus and Kazakhstan.

Officials in Minsk and Astana are fuming. Reportedly, they are considering scrappage fees of their own, ones which would hurt Lada exports.

It’s not clear if those officials will go through with the threat. What is clear is that Vladimir Putin’s eco-tax on motor vehicles has blown up in his face. Worse, Russia’s stubborn refusal to retreat from a wrong-headed policy indicates it may not be ready for full membership in the WTO.