DÉJÀ VU ALL OVER AGAIN

Some analysts say that 2011 is beginning to look a lot like 2008, with Europe’s debt crisis morphing into a bank solvency crisis with global ramifications. 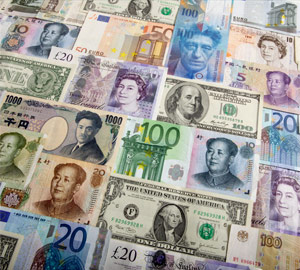 So far, the foreign exchange market—the world’s largest trading market, with a daily volume of $4 trillion—continues to function smoothly. That could change suddenly, however, with the euro on the verge of an existential crisis.

With ring fences going up across Europe and the global economy sputtering, China is making its move onto the global financial stage with an internationalization of the renminbi that is happening faster than most expected. It will be years before the “people’s currency” rivals the greenback (and the euro, if it is still around) as a world reserve currency. However, the handwriting is on the wall: There were more bonds issued in renminbi in the third quarter of 2011 than in euros.

Nonetheless, the dollar remains king of the hill when it comes to risk aversion and the preservation of capital. Despite warnings about the dismal outlook for the US economy from Federal Reserve chairman Ben Bernanke and others, the dollar remains the safe haven of choice among central bankers and global investors alike.

The threat of rising protectionism was underlined by the US Senate’s vote last month to move ahead with a bill to punish China for keeping the value of its currency low. The People’s Bank of China said passage of the bill could lead to a trade war. Fortunately, the bill is unlikely to advance in the House of Representatives.

The tables have turned from a year ago, when the House voted 348 to 79 to approve the Currency Reform for Fair Trade Act, which would have authorized the commerce department to impose duties on imports from countries with undervalued currencies. The representatives acted in the knowledge that the legislation faced tougher going in the Senate.

The currency markets are getting a lot of attention, and most of it is deserved. Those who fail to learn from the past are bound to relive it. The “Smoot-Hawley Tariff Act of 1930” had a negative effect on the economy as US exports were cut in half. Should protectionism take hold, this pattern looks set to repeat itself, and the consequences for world trade could be devastating.