Jordan has a difficult road ahead as it implements economic and political reforms as part of an IMF loan package and deals with the spillover from unrest in neighboring countries. 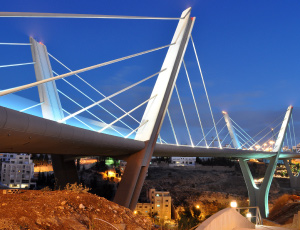 Jordan’s economy is being battered by rising unemployment and stalled foreign investment. Until recently, the country of approximately seven million people was relatively isolated from the political turmoil in the region. Now it has serious economic problems as a result of the disruption of natural gas imports from Egypt—caused by sabotaged pipelines—and an influx of Syrian refugees.

King Abdullah has implemented a series of economic reforms in recent years to head off popular uprisings that have swept the region since January 2011. Lacking oil of its own and short of water and other natural resources, Jordan depends heavily on foreign aid from its Western allies and the oil-producing countries of the Gulf.

With a budget deficit that continued to widen in 2012, the government of prime minister Abdullah Ensour cut fuel subsidies last November, triggering protests. Subsidies on electricity prices could be the next to go, as Jordan seeks to comply with the conditions of a three-year, $2 billion loan from the International Monetary Fund, which is being disbursed in $500 million portions. The IMF says it is providing liquidity to enable the authorities to gradually implement “a socially acceptable fiscal consolidation.”

Sayem Ali, senior economist for the Middle East, Pakistan and North Africa at Standard Chartered, says: “The parliamentary elections in Jordan [in January 2013] were an important milestone for king Abdullah, pushing through tough economic reforms and facing a growing discontent from the public on a weak economy, rising unemployment and the cutback in power subsidies. A strong turnout of 57% [of registered voters] gave strong credibility tothe polls.”

PRESSING REFORMS
The Islamic Action Front (IAF) boycotted the polls—just as it did the previous polls in 2010—but it remains confined to a few urban centers and has little visible support in rural areas, according to Ali. The king has also pacified the opposition by granting major political concessions to build support for economic reforms, he says, including empowering the new parliament to appoint the prime minister for the first time.

Tough reforms under the IMF program will cause a spike in inflation in the short term but will be critical to ensure a return to higher growth in the medium term, notes Ali. “These reforms will provide significant room for authorities to reduce debt and give confidence to foreign investors to set up new projects,” he says. “They will also provide space for the government to increase investment spending for creating jobs.”

Jordan’s pending membership of the Gulf Cooperation Council (GCC) could be another potential game changer. “The country’s large shale oil reserves are going to attract significant FDI over the medium term,” says Ali.

"It is also important to recognize that the oppor-tunities for Jordanians go beyond the local markets to include the GCC labor markets."

Nemeh Sabbagh, CEO of Arab Bank, based in Amman, believes that Jordan’s location, openness and economic relations make it likely to be impacted by changes in the region. “The economy grew at a rate of 2.8% in the first three quarters of 2012, which is an improvement over the previous two years,” he says. “The service sectors did particularly well, including financial services, trade and tourism.”

Jordan’s economic growth could reach 3.5% in 2013 and will gradually increase after that, says Sabbagh. It will take several years, however, to return to the high growth rates seen between 2000 and 2009.

The tourism sector was adversely affected in 2011 by unrest in the region. “Yet, there was a good recovery in 2012, with tourism revenues increasing by 30% in the first nine months of 2012,” Sabbagh says. “Jordan’s tourism benefits from the country’s stability and its reform path, as well as the developed and diverse infrastructure for various types of tourism.” The new terminal at Queen Alia airport in Amman, for example, will help the sector.

Nonetheless, more needs to be done, given the significant potential in this area, he says. The country’s main attractions include Petra, a city carved into rock by the Nabataeans 2,000 years ago, and the Dead Sea.

The financial services sector was also affected by the Arab Spring—especially Jordanian banks with a regional presence. Arab Bank was exposed to the full force of the Arab Spring, notes Sabbagh, as it has an extensive footprint in the Arab World.

Nonetheless, net profits for the group increased by 15% during 2012. “In fact, we saw increases in profits in most of the Arab Spring countries, with no unusual problems related to the events,” Sabbagh says. Arab Bank’s presence in the GCC countries has also positively contributed to profits, given the robust pace of economic activity in the Gulf, Sabbagh says.

Arab Bank has been present in Egypt since 1947 and operates a network of more than 25 branches. “As the situation there is still evolving, we will maintain our cautious approach with the aim ultimately to be able to take advantage of the great potential that lies in the Egyptian market,” notes Sabbagh. Arab Bank–Syria, a partially owned subsidiary of Arab Bank, commenced its operations in Syria in January 2006. “The ongoing crisis in Syria has had a serious effect on the overall economy and, along with it, the banking sector,” Sabbagh says.

BEYOND LOCAL MARKETS
Jordan’s unemployment rate reached 12.5% at the end of 2012, with the highest rate of joblessness among college graduates, reflecting a mismatch of skills with available jobs. “Jordan’s economy needs both—more jobs, particularly quality jobs for the educated graduates, and a better match between job seekers and employment opportunities, along with improved training and internships,” Sabbagh says. “It is also important to recognize that the opportunities for Jordanians go beyond the local markets to include the GCC labor markets.” Remittances from Jordanian workers abroad account for 10% of Jordan’s GDP.

The project-financing market in Jordan, and the region as a whole, has been affected by the global economic slowdown and the ensuing regulatory changes that caused the withdrawal of a number of international lenders.

As a result, multilaterals and export credit agencies—especially from Asia—are playing an even more important role in financing projects, while regional banks have had to step up to provide necessary debt financing.

"Reforms will provide significant room for authorities to reduce debt and give confidence to foreign investors to set up new projects."

“In Arab Bank’s case, we managed to grow our business during the last year through providing advisory, underwriting and funding services, as well as issuing guarantees for essential projects,” says Sabbagh. The bank provided financing and investments in the infrastructure sector in the UAE, petrochemicals in Saudi Arabia, construction in Qatar and wastewater treatment in Jordan.

Meanwhile, governments across the region are watching closely to see how Jordan fares with its efforts to cut subsidies and institute tough reforms. The Middle East has more fuel subsidies than any other region, and the system of generalized price subsidies must be changed to reduce waste and restore fiscal balance, according to the IMF. 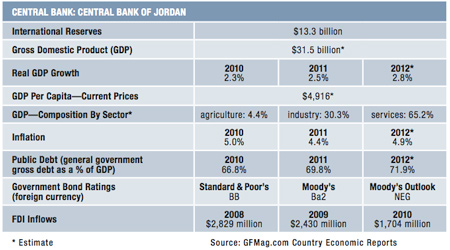