For many, the Arab Spring symbolizes years of painful economic and political reforms ahead. But financial institutions are upbeat about the region’s prospects, noting that markets such as Iraq and Libya continue to outperform. 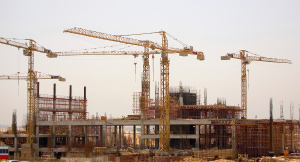 The increased standards of living demanded by Arab Spring revolutionaries could be delivered in the medium term, despite countries’ having to make painful economic and political transitions, say bankers. Notwithstanding the unrest, for many banks it is business as usual as they re-engage in postrevolutionary and postwar economies in the region.

Conditions vary considerably from country to country. Iraq and Libya are seeing strong economic growth on the back of rising oil production. Egypt is struggling, however, and it remains to be seen how an Islamist-led government can create economic growth as it seeks funding from the International Monetary Fund. Syria’s economy is in a shambles, as the violence there continues.

HSBC has the most extensive footprint in the Arab world of any international bank, yet its operations in the region were not negatively impacted by the Arab Spring uprisings.

Simon Cooper, CEO of HSBC Middle East, says: “In Egypt, there were of course challenges, but the consequences were less than one would have expected. We did have some of our people camping out overnight in branches to maintain services and overall, the commitment of the staff was beyond the call of duty.”

Cooper says the uprisings prompted some governments to take quicker action on infrastructure investments. In the case of Egypt, Cooper says it is an anchor in the Arab World and will come through in the long term. “There is a global desire to see Egypt succeed,” he adds.

Elias Bikhazi, chief economist at National Bank of Kuwait (NBK), says he expects Egypt’s economy to grow 2% to 3% in 2013. Egypt is likely to receive an IMF loan around midyear, and growth will pick up in the second half, he forecasts.

Christos Papadopoulos, regional CEO for the Middle East, North Africa and Pakistan, Standard Chartered, says: “IMF support for Egypt will be forthcoming. The IMF will be accommodating and will give the country breathing room to reposition its economy. There will be growing pains, but I am optimistic about the medium term.”

Egypt will not be allowed to become a failed state, because “what happens in Egypt does not stay in Egypt. It is a very important part of the Arab World,” Papadopoulos says.

There is a tug of war going on in Egypt between Islamization and democratization. Democratization will take the lead as the opposition gets more organized and pushes for more moderation, according to one market watcher: “The Muslim Brotherhood is very pro-business. The banks are also doing quite well.”

NEW FRONTIERS
Papadopoulos describes Egypt, Iraq and Saudi Arabia as “the markets of tomorrow.” In Iraq, Standard Chartered is in the process of applying to open branches in Baghdad, Basra and is transforming its existing representative office in Erbil into a wholesale banking branch. “We plan to service multinational companies—US, Chinese, Saudi Arabian and others—with onshore solutions,” Papadopoulos says. “It is a question of when. There is never a perfect time, so now is as good a time as any.”

According to a report by NBK Economic Research, Iraq’s oil output fell to a six-month low of 3 million barrels per day in December, 2012. “Iraqi oil production during the month was affected by a number of technical and political issues, including loading problems with offshore terminals in the south and the ongoing dispute between Baghdad and the Kurdistan regional government,” the report says. Despite this, Iraqi output averaged almost 3 million barrels per day for 2012 as a whole—the highest production level since the late 1970s, it adds.

Although Saudi Arabia is not considered a country in transition, it is gradually instituting widespread reforms. Succession is a key issue in Saudi Arabia, according to market watchers, and key posts are starting to be awarded to the younger generation.

"What happens in Egypt does not stay in Egypt. It is a very important part of the Arab World."

“The opportunities in Saudi Arabia are enormous,” Papadopoulos says. The kingdom accounts for half of the GDP of the Gulf region, with massive infrastructure spending and investment, he says. “There is phenomenal growth and opportunity in banking,” he adds. “Saudi Arabia is also interested in investing and trading with Egypt and Iraq.”

Libya’s post-conflict recovery was stronger than expected. The International Monetary Fund estimates real GDP grew 122% last year, following a 60% decline in 2011. “At the height of the fighting, MasterCard was the only way you could withdraw cash,” says Raghu Malhotra, head of the Middle East and North Africa for MasterCard. There is a secular shift under way in the region from cash to electronic payments, he says.

E-COMMERCE IS SPREADING
Cash, however is still king throughout the region. In Saudi Arabia, cash and checks account for 91% of all transactions, and 82% of transactions in the UAE, Malhotra says.

The shift to [electronic] payments began with recurring bills for utilities and education, he says. It is now increasing for low-value payments, such as purchases at coffee houses, he says from his office in Dubai’s Internet City. “Financial inclusion—in the GCC [Gulf Cooperation Council] and Egypt—is taking more and more people from outside into the banking system,” Malhotra says.

Countries are at different stages of development and need to focus on policies that fit their needs. “Payroll cards are gaining in popularity in the region,” says Malhotra. “Dubai and Qatar have an electronic vision, which includes the intention to go cashless.”

It costs between 50 and 150 basis points, or up to 1.5% of GDP, to maintain cash in an economy, explains Malhotra. “Electronic payments are safer and more efficient.”

In the GCC countries, mobile-phone penetration is as high as 200% in places such as the UAE, and Internet penetration is higher than 75%, says Malhotra. “In these affluent countries, it’s about convenience. The phone becomes your card and e-commerce is widespread.”

Egypt, with its large domestic economy, appears to be back on track. IFC (International Finance Corporation), a member of the World Bank Group, recently invested $6 million in Fawry, Egypt’s leading electronic payment provider, to help it extend its network of MasterCard-enabled payment terminals across the country. Helping consumers to pay bills and making it easier for businesses to receive payments will encourage economic growth, the IFC says.

“There are a lot of inefficiencies associated with cash, which is used in about 99% of all household transactions in Egypt,” says Ashraf Sabry, Fawry CEO. “Electronic payments make it easier to do business, and in a country with a large population and very low banking penetration, they are also a key driver of financial inclusion.”