As the infrastructure boom continues, it may be time for GCC countries to reevaluate how they select and fund new projects. 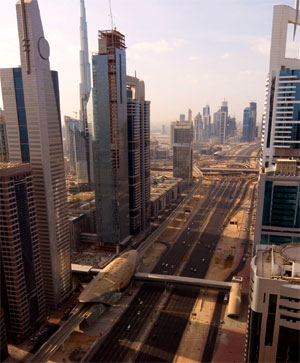 “Abu Dhabi cannot rely solely on the auto when the population reaches three million. The city will need a multi-layered transportation network to connect the downtown core with new growth nodes and the developed islands,” reads a passage from Abu Dhabi’s 30-year plan. It goes on to discuss the need for such a transportation network, including “high-speed rail to distant destinations, a local metro rail, freight rail, a surface network of buses, street cars and light rail.” Qatar, a much smaller GCC country, has discussed the need for sizable investments in infrastructure that “will be significant relative to the size of the economy.”

An infrastructure boom is taking place in the GCC. Most of the GCC countries have some kind of 30-year plan or vision to develop projects, as these oil-rich countries look to invest surplus funds in transport, utilities (power, water) and petrochemical infrastructure to keep pace with their rapidly growing economies and populations.

In 2012 when he was chief economist of the Dubai International Financial Centre (DIFC), Nasser Saidi estimated that developing oil export economies needed to commit 11% of their GDP to maintaining and improving their national infrastructure. Areas with the greatest need for investment, he said, were transport, particularly roads, and the electricity sector.

Historical underinvestment in infrastructure, rapidly-growing populations, the emergence of the new Silk Road trading route between the MENA region and Asia and the need to diversify beyond oil and gas are all contributing to the need for heightened investment in infrastructure. “GCC countries are looking to diversify away from carbon-based economies, and as part of that they have to become more efficient in order to compete in the global market,” says Tim Risbridger, partner and head of major projects, Middle East, at international consultancy EC Harris. “This requires investment in new transportation infrastructure—airports, ports, highways and rail.”

The infrastructure gap is not unmanageable in the UAE, Qatar or Oman, notes Dolan Hinch, director and head of infrastructure and energy, Middle East and Africa, Deutsche Bank. “Kuwait has more to do, and in Saudi Arabia the population is growing exponentially, so it needs to put in more infrastructure.”

Despite the quest to support economic diversification through infrastructure investment, Hinch says, most of the large infrastructure projects in the GCC are dominated by power, oil and gas and industries based on natural resources. Risbridger says there is currently a major focus on transportation in the region, with some facilities being built ahead of demand as a way to attract new businesses into the region.

Unlike in Europe—where most of these projects are developed on a public-private-partnership basis—in the GCC, PPP has not really taken off yet. “Governments have tended not to choose PPP and have just written a check,” says Hinch. “Part of the reason for that is access to funds. Why borrow [at] 250bps above Libor when you can write a check from your own balance sheet?”

Risbridger says that for PPP to be attractive to investors, there have to be reliable revenue streams. “[GCC] governments have reviewed the value of using the PPP model for highways, but it is difficult to financially justify this approach when they have direct access to cheap capital. There isn’t currently the appetite in the region for toll roads, so revenue can only be generated through operational efficiency KPI [key performance indicator] mechanisms paid for by the government, at what is often seen as a premium price.”

However, in the utilities sector, where there is revenue generation, PPP is taking hold. “There are some examples where PPP is working and has worked for a number of years now,” says Risbridger, “but in transportation it is probably some way off.” GCC governments may have the capital to finance large-scale infrastructure projects, but Hinch says they should get the experience and operating benefits (risk mitigation) of PPP and use their own capital to finance the more difficult ones (toll roads, schools hospitals).

“Nobody really asks about the feasibility of these projects,” says Saidi, adding that reaching into their pockets every time a piece of infrastructure needs financing doesn’t subject these projects to a true market test. “Financing infrastructure projects, petrochemical, water, ports, airports through bonds or sukuk—that gives you a market test as to their viability.” Saidi believes the Middle East is at the start of a major shift in terms of how public finances are handled. “If you want to finance electricity and water, turn to the markets. I am encouraged by the UAE, where the Dubai Electricity and Water Authority used sukuk markets,” he notes.

Iqbal Khan, chief executive of Fajr Capital, an investment firm based in the DIFC, says there is a growing realization that the region’s infrastructure needs cannot be met by the public sector alone. “The development of PPPs, therefore, is leading to opportunities for the private sector to contribute towards infrastructure development to enhance the provision of services and facilities and create enduring value through synergies between public authorities and private companies.”

Mark Lemmon, CEO of Fajr Capital’s MENA Infrastructure, a private equity infrastructure investor, says there are several experienced international developers prepared to invest in companies within the GCC that are responsible for the construction, operation and ownership of key infrastructure assets such as power and water utilities. In addition, he says development agencies, sovereign wealth funds, pension funds and other sources of capital also have an appetite for investment in infrastructure in the GCC. The strongest appetite, he says, comes from Asian countries.

The MENA Infrastructure Fund that Lemmon manages invests in the equity of companies that own either brownfield or greenfield infrastructure assets. “This capability and appetite provide a significant level of increased liquidity for this asset class,” says Lemmon. “In turn, this liquidity enhances competition from private-sector consortia for winning projects to build new infrastructure facilities in the GCC region—hence enabling governments to achieve optimal pricing for infrastructure investments procured via public-private-partnership structures.”

Hinch says export credit agencies also play a major role in infrastructure finance in the region. “The Japanese government is the single largest lender to Saudi Arabia and is mostly invested in power plants and petrochemicals,” he says. Islamic financing is also being used in some infrastructure projects. “The uniqueness of Islamic finance, which allows for conventional investors to also participate in its issuance, makes it an inclusive financing option with a broader appeal,” says Khan of Fajr Capital. “Syndicated financing and tapping into the sukuk market are two concrete steps in the path to achieving financial close.” Khan says infrastructure is also an attractive asset class for Islamic investment institutions such as Fajr Capital, which seeks to complement sizable and stable returns by creating long-term socioeconomic value.

Lemmon also expects to see an increase in equity investment in infrastructure in the region from funds and from large institutions participating directly in investment projects. But for PPP to really take off, Hinch says, a broader PPP framework that looks at risk allocations and what is expected from the development is needed. “Now, it is just an ad-hoc exercise,” he says.

But with billions slated for investment in infrastructure across the GCC, are all of these projects likely to get done? Pretty much all GCC countries are rightly reviewing the situation on an ongoing basis, says Risbridger, and are deciding which investments should be prioritized. “Just the sheer volume of what is planned can’t be done in five to 10 years. As countries grow and develop, they are having to prioritize projects to reflect changes in their population demographics and the needs of new industries. So what we are seeing is that some projects are being put back whilst others are being brought forward.”

Hinch says there is significant potential for infrastructure development in the GCC but that a different view is needed of what money to use. At the moment, he says a lot of infrastructure projects get done based on relationship lending and pricing. But if external investors are to get involved, they will want to see a return on their investment. “Some of the infrastructure projects are just a pipeline of dreams,” says Hinch. “Some won’t get done. Only those projects that make sense will get done.”