As US shale oil and gas production continues to grow, it could have an impact on GCC economies over both the short and long term.

The supply shock to global energy markets created by a surge in US oil and gas production is putting a damper on economic growth in the Arab Gulf, as oil-exporting countries of the Middle East have become more reliant on high oil prices to balance profligate fiscal spending. The International Energy Agency says US shale oil will help meet most of the world’s new oil needs in the next five years, and the US could become the world’s largest oil producer as early as 2017, the IEA forecasts.

Real GDP growth in Saudi Arabia, the world’s largest oil exporter, will slow to 4% this year from 5.1% in 2012, owing to an expected decline in oil production to support prices in the face of new supply, according to the International Monetary Fund. “Private-sector growth is expected to be strong, but oil production is likely to drop below 2012 levels, while government spending growth may slow,” the IMF noted following a consultation with Saudi Arabia in July. In Kuwait the central bank expects economic growth to slow to 1.9% this year from 6.3% in 2012, also owing to lower production.

The pace of public spending in a number of Gulf Cooperation Council countries increased dramatically in the wake of the Arab Spring uprisings in an effort to placate the populace. Despite the expected slowdown in government spending this year, continued strong investment in non-oil industries—such as petrochemicals, fertilizers, steel and aluminum—will support non-oil GDP growth in the near term, economists say. But any shocks to the oil price could have a serious impact.

James Reeve and Andrew Gilmour, senior economists at Riyadh-based Samba Financial Group, said in a recent report: “The outlook for oil prices is perhaps more uncertain than normal. Worries about conflict in the Middle East are likely to keep markets on edge, but the shale-oil ‘revolution’ in North America seems set to loosen fundamentals in the medium to long term. We see [Brent] prices drifting—albeit remaining high by historical standards—to some $98 a barrel by 2015.” 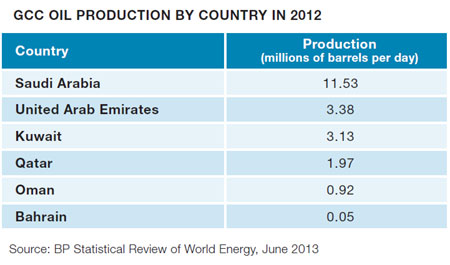 The Organization of Petroleum Exporting Countries (OPEC) expects demand for crude produced by its member countries to fall 2.6% next year, even as global oil demand is forecast to rise by 1 million barrels a day. “GCC oil production has already been cut quicker than we had expected, and real oil-sector GDP is seen declining 2% this year and unchanged in 2014,” the National Bank of Kuwait (NBK) said in a recent report. This will still leave oil output at historically high levels and be enough to finance rising government spending without draining financial reserves in most GCC countries, the bank says.

The IMF notes in its latest regional economic outlook that, given oil-exporting countries of the Middle East and North Africa region’s current vulnerability to oil-revenue shocks—despite a near-term positive outlook for the regional economy—these countries are projected to start drawing on savings soon and should contain current spending. “It is important to contain hard-to-reverse spending to increase resilience to oil price declines,” the IMF says. Governments should ensure that capital spending is productive and invest in human capital, as well as implement reforms to increase economic diversification, it adds.

The expected drift lower in oil prices will affect economic activity in Saudi Arabia, the Samba economists say. “Activity has already slowed somewhat, and we expect this trend to consolidate as the government trims the pace of capital spending. Thus, we see non-oil GDP growth easing from an estimated 4.8% this year to 3.5% in 2015.” The main risk to this relatively benign outlook, according to the Samba economists, comes from the oil market: Projections of North American supply additions are still very uncertain, and there is a chance that the market will struggle to absorb the new supply, putting more downward pressure on prices.

Saudi Arabia’s government spending commitments are substantial and leave little room for a reduction in the event of a sharp and sustained downturn in oil prices, the Samba economists say. However, they add, “we do not currently expect such a downturn, and it is also true that the authorities have built up substantial savings worth more than 100% of GDP.” 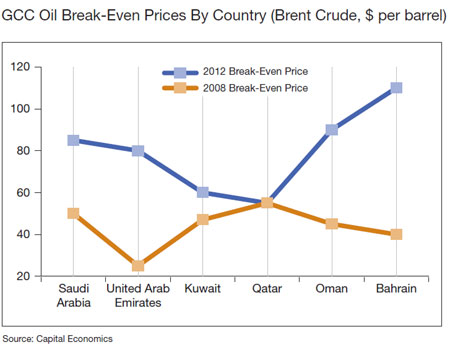 Moody’s Investors Service placed the debt of Bahrain on ratings watch in June for a possible downgrade, noting the country’s rising debt burden and reliance on a high fiscal break-even oil price, which is estimated by the IMF at $118.7 a barrel. The break-even price is the price needed for oil revenues to cover the cost of government spending (see chart, below). In addition to debt worries, the ongoing political and social tensions in Bahrain could ultimately weaken the country’s growth prospects, according to Moody’s. The United Arab Emirates and Saudi Arabia need a price of about $85 a barrel to balance their budgets, up from about $20 a barrel in 2003.

Neil Shearing, chief emerging markets economist at Capital Economics in London, says that although the US shale-oil boom will have an impact on the GCC mainly through the price channel, “oil prices would have to fall a long way and stay low for a long time to cause serious fiscal problems for most of the GCC countries.” Bahrain, Oman and then the UAE are the most vulnerable to a decline in oil prices, Shearing says. Saudi Arabia has strong reserves to count on: more than $694 billion of foreign currency reserves, according to the Saudi Arabian Monetary Agency. He adds that the kingdom would have no trouble borrowing in international markets, if necessary.

Oil prices rose to the highest levels in more than a year during July, amid political upheaval in Egypt and a seasonal rise in summer driving in the US and elsewhere, as well as growing demand for air conditioning, particularly in the Middle East and other emerging markets. Nevertheless, the trend for the next three years appears to be toward weaker prices. Capital Economics expects oil prices to drop to about $85 a barrel by the end of 2015, putting more pressure on budgets in the GCC. Substitution of shale gas for oil in transportation could have a long-term impact, Shearing says. In addition, the development of shale fields in Russia and China could add to supply.