PROFITING FROM THE BEAUTY PAGEANT

Despite the eurozone’s debt woes, the euro has remained remarkably resilient thanks to a range of factors, including a more credible ECB under Mario Draghi and diversification away from the dollar into the euro. However, risks remain. 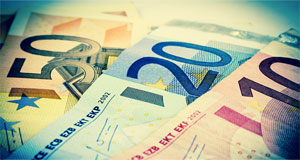 The eurozone’s debt crisis has dominated headlines and driven markets for much of the past 18 months––from a global perspective it has been the biggest story around. However, while the economies of the eurozone’s periphery have plunged into ever-deeper despair, the region’s currency––the euro, which celebrated a decade of circulation at the beginning of 2012––has stayed robust against the world’s currency benchmark, the dollar.

“The euro has proved spectacularly resilient not just in the past 18 months but throughout the post-2007 period,” says Lee McDarby, head of dealing for the corporate and institutional treasury sales desk at specialist banking and asset management firm Investec. “There was a brief period when the dollar became king when the crisis began, but since then the euro has shown remarkable bounce-back-ability despite the drumming of the eurozone debt crisis becoming ever louder.”

”The euro has experienced some volatility both in its recent history––its value against the dollar has varied by 18% over the past year––and during its lifetime as a currency. It has fluctuated by more than a third of its value against the dollar over the past decade. However, it has consistently recovered, often against expectations. “The eurozone debt crisis became headline news in late 2009, when the gap in Greek financing became common knowledge,” says Nick Beecroft, senior analyst and chairman at online trading and investment firm Saxo Capital Markets UK. “The euro started 2010 at $1.42 and got to $1.20 by June. The prophets of doom were talking about parity within months, but they were proved wrong: By 2011 the euro had bounced back to $1.50.”

In recent months, some of the strength of the euro is clearly attributable to the improved reaction by markets to how the eurozone crises are being handled by politicians and the European Central Bank (ECB). “There has been progress in Europe, which has bolstered the euro,” notes Nawaz Ali, market analyst at Western Union Business Solutions, which provides FX services for businesses of all sizes. “There is clear progress on fiscal policy: There is now little danger of Germany walking away from Europe’s problems. [German chancellor Angela] Merkel has stood by [president of the ECB Mario] Draghi––and Greece––despite strong domestic pressure to do otherwise. Draghi’s promise to do whatever it takes to resolve the eurozone crisis has enabled the euro to rally 7% against the dollar since July.” Draghi has credibility in a way that his predecessor, Jean-Claude Trichet, did not, Ali adds. “The key to the euro is the ECB’s newfound credibility.”

However, as Investec’s McDarby notes, it must be remembered that currency markets are effectively a reverse beauty parade––the market is always looking for the best of a bad bunch. “Clearly, there is a deep-set rot in the eurozone that needs to be treated,” he says. “But the relative disadvantages of the dollar have been greater in the short term, and therefore the euro has remained strong.”

Beecroft at Saxo agrees. “Currencies are a bilateral subject, and in the case of euro/dollar, the Federal Reserve has been more activist, more dovish and more emphatic about its dual mandate [to encourage growth as well as control inflation] than the ECB,” he says. “Until fairly recently, the ECB benefited from the perception that it had a single mandate––to restrain inflation––and that it was essentially the Bundesbank in disguise.” While some of that perception has now been eroded, from a currency support perspective, the ECB still compares favorably to the Federal Reserve. “[It] continues to ease in excess of market expectations—through [its third bout of quantitative easing (QE), known as] QE3—and now appears to have adopted a redefinition of its mandate similar to Chicago Fed president [Charles] Evans’s suggestion that it should target an unemployment rate of 7%, provided inflation is below 3%,” says Beecroft. “Except they made no mention of any inflation constraint.”

There have been other supportive factors for the euro. “The decision by China’s central bank to diversify its reserves away from the dollar and into the euro has been an important driver of the euro’s bounce-backs,” says McDarby at Investec. “There appears to be a genuine demand across Asia for the currency, and that has been supportive.” Beecroft at Saxo agrees: “After 2008, China realized all of its eggs were in one basket, and it increased its holdings of euro and other currencies. The rate of purchases has declined since then, but it is still supportive.”

Meanwhile, the impending US fiscal cliff––tax rises and spending cuts will kick in in 2013 unless Congress and the president reach agreement to the contrary––is also likely to continue to benefit the euro. “The focus is on the fiscal cliff in the US,” says Beecroft. “There are six possible outcomes from the elections, and only two—a clean sweep for either the Republicans or Democrats—are advantageous in terms of the dollar.”

Equally, the effects of QE3 in the US––and the expectation of further QE should it be necessary––will continue to depress the dollar. The dollar is also weighed down by long-term interest rate expectations, according to Ali. “In Europe rates remain higher and are therefore relatively more attractive and give the ECB greater flexibility than the Fed.”

Ultimately, however, it seems that something must give in the eurozone, and the euro will therefore be at risk, according to McDarby. “The euro is far from home and dry: Greece and Spain could still be eased out of the currency,” he adds. Ali agrees that “Greece has regularly unraveled the euro’s progress in recent years and is capable of doing so again.” Indeed, Beecroft says a Greek default or euro exit is possible within the next six months. “While the market now views such an event as less of a potential calamity that it was perceived to be nine months ago, that may be a miscalculation: Such an event would breach the dam wall and be a shock to the system.”