FX Supplement: The Renminbi As A Reserve Currency

Pressure from BRIC countries for a new international reserve currency to replace the dollar is growing. 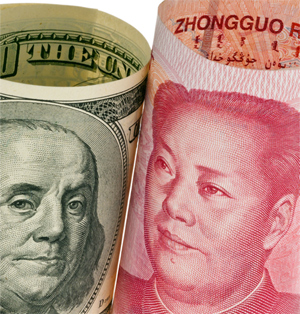 China, the world’s leading trading nation, would like to reap some of the benefits and prestige the US enjoys as a result of the dollar’s role in invoicing international trade. Not only would more renminbi-denominated trade help insulate China from external shocks and reduce foreign exchange costs for Chinese companies, but it also would pave the way for the Chinese currency to become a reserve currency, alongside the dollar, the euro and the Japanese yen.

China and Brazil signed a $30 billion currency swap agreement in June that will enable the two big emerging markets to trade with one another without using the dollar as a medium of exchange. The swap lines could also be used in case of crisis to shore up reserves.

“As international credit remains scarce, we will have enough credit for our transactions,” Brazil’s finance minister, Guido Mantega, said at the time. China has already replaced the US as Brazil’s largest trading partner. Beijing has signed currency swap accords with about 20 other trading partners, including Australia, Japan, South Korea, Turkey, Singapore, Hong Kong, Indonesia, Malaysia, Thailand and others.

More recently, Mantega criticized the US Federal Reserve for its decision to buy $40 billion in mortgage-backed securities each month, as well as the Bank of Japan for increasing its bond buying and printing money. “They will be stimulating the currency wars,” he said. “It’s natural other countries will defend themselves from these attitudes.” Mantega said Brazil would take all necessary steps to keep the real from appreciating and damaging the country’s export competitiveness.

The BRIC countries have been pushing for reform of the global monetary system in the wake of the financial crisis. At a summit in Brasilia in April 2010, they pledged their support for “a multipolar, equitable and democratic world order.” They called for stable reserve currencies and sustainable fiscal policies.

“While it is clear that the dollar is gradually losing its central role, there is still very little agreement and understanding on what will be the acceptable replacement,” says Vitaly Bouzoveria, head of fixed-income sales and trading at VTB Capital, the first bank in Russia to offer offshore renminbi bond trading.

“We see the international monetary system moving from a dollar-centric system to a multipolar system in the medium term, reflecting the shift in economic power from West to East,” Bouzoveria says. “In this regard, I would expect the renminbi to be a key regional currency.”

The dollar is just a unit of account, and any expansion of trade between Russia and China does not necessarily have to be invoiced in dollars, according to Bouzoveria. Russia’s accession to the World Trade Organization will help it explore new trade and investment opportunities, he says.

If Moscow can develop as a financial center with international standards, it could compete with London and Singapore and other cities seeking to become offshore centers for the renminbi, Bouzoveria says. “It [Moscow] is a great entry point and gateway to the CIS countries, and many of them are good trade partners with China and would welcome intermediation in the renminbi,” he says.

In the US, derivatives exchange CME Group recently announced that it is expanding its offerings of renminbi products to include deliverable renminbi futures on its International Monetary Market division. “The renminbi market has grown significantly during the last two years and is highly active both during as well as outside of Asian trading hours,” says Derek Sammann, senior managing director, foreign exchange and interest rate products, at CME Group. “As the renminbi continues to internationalize, it will become increasingly important to provide global access to these products.”

The renminbi is now being used for business transactions in multiple offshore locations, including Hong Kong, Singapore, South Korea, Australia and elsewhere, CME says. Therefore, there is a need for capital risk-management tools for the Chinese currency, it says.

“The status of the dollar as a reserve currency is under threat as the [US] fiscal situation deteriorates and America’s imperial power wanes,” says Humayun Shahryar, CEO and chief investment officer at Auvest Capital Management, a hedge fund that oversees $100 million. “It is not just the dollar’s supremacy but the whole fiat money experiment that is coming to an end,” Shahryar says. “The problem of too much debt cannot be solved by taking on more debt.”

In what he describes as the “morphine effect,” Shahryar says the financial system is requiring ever-larger doses of stimulus to have an effect on the real economy. “The world is going through a massive secular deflationary cycle, and demand is collapsing,” he says. “Nobody really knows the true value of a currency.”

What is needed is a more stable monetary system, with rules agreed to by everyone, according to Shahryar. “I do support some of the things that the Bundesbank is saying, such as having rules that are not broken.”

Gold could play a role in the new monetary system, “although current opinion is against the gold standard,” he says. “Technology has made massive progress in payment systems, and electronic money backed by an agreed algorithm is possible,” he adds.

Trying to make the renminbi a reserve currency won’t be easy, Shahryar says. “It would require China to run a current-account deficit so that there is excess Chinese currency in the world to ensure supply,” he says.

China is losing its competitiveness and is already urbanized, Shahryar says. “One solution would be for its surplus capital to flow to India to finance an infrastructure buildup,” he says. “Unfortunately, the current model of globalization is unbalanced, and the fiat money system with the dollar as its linchpin is a major factor in its failure.”

Renminbi bonds have been chosen as foreign reserve assets by some African central banks, according to a report issued in September by HSBC. The central bank of Nigeria and the Bank of Tanzania have purchased quasi-sovereign dim sum bonds, it says. The Bank of Korea started buying Chinese government debt in April.

Plus, economic conditions may soon improve. HSBC’s Flash China Manufacturing Purchasing Managers’ Index edged up to 47.8 in September, raising hopes that China’s manufacturing decline may be stabilizing. “Manufacturing activities remain lackluster, thanks to weak new business flows and a longer-than-expected de-stocking process,” Qu Hongbin, chief economist for China at HSBC, said in a statement. “The recent easing measures should be working to lead to a modest improvement from the fourth quarter onward.”

China approved infrastructure spending of $150 billion in September, and the central bank has cut interest rates and lowered bank reserve requirements. The government also has acted to speed payments of export tax rebates and increased loans to exporters. China’s economy is an important engine of global growth, and assuming it stays it that way, the internationalization of the renminbi could accelerate.

FX SUPPLEMENT 2012: THE RENMINBI AS A RESERVE CURRENCY