A RACE TO THE FINISH

With several of the world’s fastest-growing economies to be found in sub-Saharan Africa, investors are keen. They are now looking beyond the commodities sector, and China continues to lead the charge. 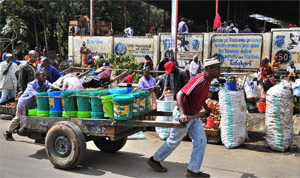 Africa has become one of the world’s most dynamic growth regions, despite sluggish demand from some key export markets and softer commodities prices. The International Monetary Fund’s latest forecasts suggest average growth across sub-Saharan Africa will rise from 5% in 2011 to 5.25% from 2012 to 2013, with low-income countries growing at 6.6% (or double its projections for global growth) on the back of strong domestic demand, infrastructure spend and inward investment.

“What hits you,” says Sandeep Katwala, regional managing partner for emerging Europe, Middle East and Africa at international law firm Linklaters, “is the buzz and the vibrancy of economic activity in African countries like Ethiopia. Just recently, seven out of the world’s 10 fastest-growing economies are to be found in sub-Saharan Africa.”

True, those impressive growth rates started out from a low base, and there are sharp regional differences. More-developed, middle-income economies are forecast to grow by 3.4% this year, while South Africa, which is more closely integrated into the global economy, is expected to grow by just 2.6%.

Across North Africa, two countervailing forces are at work. Economies most closely linked to Europe, such as Morocco and Tunisia, are feeling the impact of the downturn there. However, there has been a revival in domestic demand and regional trade flows since the dislocations caused by the Arab Spring. “Among the star performers has been Egypt,” says Stephen Bailey-Smith at Standard Bank, “with the return of market confidence and the potential of an IMF deal.”

Overall, the outlook for Africa is distinctly upbeat. “There are a number of structural drivers,” says Bailey-Smith, “demographics, urbanization, technology transfers, which means that Africa will maintain its economic growth and should over the longer term outperform most other emerging markets.” As a result, inward investment flows—both in terms of portfolio investors and FDI—have increased dramatically.

But whereas previously most inward investment was focused on energy and other natural resources, there has been a shift of emphasis—first into telecoms and, more recently, into healthcare, food and beverages and financial services. “We are beginning to see large multinationals expanding their footprint across Africa,” says Katwala. “Big pharma companies typically look at direct acquisition of a local player to serve as a distribution platform for that country or to use it as a hub to distribute their product to other countries.”

Katwala observes that “private equity groups are now taking significant minority stakes in financial services companies.” It started off in banking, he says, but recently spread to the insurance sector. “A multinational typically sets up a joint venture with a large domestic player, thereby providing distribution for their product and mutual benefits through combining their respective expertise.”

Outside investors are also moving into retail banking, especially mobile and e-banking where, because of limited physical branch networks, there is huge growth potential.

Although inward investment flows have come largely from European-headquartered multinationals, Katwala envisions more south-south flows. China is by far the largest investor and is leading the way in gaining access to energy and mineral resources, partly through the availability of soft loans but also owing to its ability to provide a consortium approach capable of taking on huge turnkey infrastructure projects.

“The Chinese are beating the United States and Europe in securing major deals in Africa because they move fast and are able to offer the host country better incentives,” says Philip Boulton, senior managing director at London’s FTI Consulting, which provides help to businesses going into Africa.

THE CHASE IS ON

One reason for China’s success, Boulton says, is that in the West, “we have tied ourselves up with legislation that makes it difficult to operate with speed.” Large multinationals, especially, need to comply with transparency, ethical and environmental rules that can impede or delay their bidding for deals offering access to energy resources in return for significant infrastructure development. For which reason, he says, “smaller mid-cap players that are often less restricted can move more nimbly.”

Boulton observes that the Chinese model of doing business in Africa suffers few such constraints. “Their companies—many of them state-controlled—look at Africa from a strategic perspective in terms of natural resources and also geopolitically. Basically, they are offering infrastructure for energy and minerals.”

But according to Katwala, Indian, Russian, Brazilian and Korean firms are all in the race. “Indian companies have been expanding rapidly into Africa, and the really big ones like Tata and Essar already have established operations there. Russian companies are mainly investing in energy. And agribusiness—potentially a huge growth area—is attracting investment from Middle Eastern and other players.”

But whereas the broader growth dynamics remain strong, Bailey-Smith stresses the importance for investors of nation-specific debt cycles that can produce high volatility. That is because when most economies in Africa grow swiftly, they suck in imports, causing a deterioration of the current account and weakening the local currency. Usually rather late in the day, the government intervenes and raises interest rates.

"Among the star performers has been Egypt, with the return of market confidence and the potential of an IMF deal"

“Over the past 18 months,” Bailey-Smith observes, “there have been currency crises in Kenya, Tanzania, Uganda and, arguably, Nigeria, with governments raising interest rates above 20% to contain inflation and defend the value of their currencies.”

It seems to have worked, as interest rates have fallen into single digits since then. Consequently, investor appetite for African sovereign bonds has risen exponentially. Bailey-Smith estimates inflows of $6 billion to $7 billion in just the two months to end-October. This is partly driven by the inclusion of more local bonds into indexes such as J.P. Morgan’s index for diversified emerging markets.

Bailey-Smith points out that African sovereign eurobonds—dollar- or euro-denominated—have risen on average by more than 25% over the year to date. A newcomer to these markets, Zambia, was able raise debt at 5.6% in September, and since then the bonds have traded upwards to the point that currently it could borrow more cheaply than Spain. “Nigerian bonds are trading at the same level as [those of] Ireland or Italy,” he says, adding that this raises questions about why aid is going from European countries to African nations that are able to raise money more cheaply than they can.

Although corruption and red tape remain widespread in Africa, recent World Bank reports on the ease of doing business point to rapid improvements in many jurisdictions. Other potential constraints are local content regulations and difficulties in hiring the right people. “If you want to expand your operations,” observes Katwala, “accessing skilled human capital can be an issue in many African countries.”