Global Finance takes a long, hard look at the prospects for the coming decade. 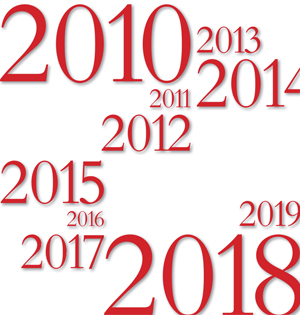 The first decade of the 21st century began with the spectacular and painful collapse of the dot-com bubble and ended in the turmoil of the credit crunch and a global financial near-meltdown. Those 10 years also witnessed the first clear signs emerging of a fundamental shift in the balance of economic and political power from West to East, as the big emerging markets of Asia—and beyond—began to challenge the longstanding dominance of the United States and Europe. At the same time, the concept of sustainable and responsible business moved from the fringes to the mainstream, and corporations had to rapidly adapt to working with a new level of transparency, fostered by the stunning increase in the access to information provided by the Internet.

As the century’s second decade dawns, Global Finance takes a long, hard look at the prospects for the world’s corporations, banks, regulators and governments in a world that looks very different than it did at the turn of the millennium. While the forces shaping the world of business are much the same—technology, population changes, natural resources, regulation, environmental concerns, political moves and social pressure—the effects of those forces are in a constant state of flux. As Global Finance was going to press, for example, world leaders were huddled in Copenhagen trying to hammer out a plan to save the world from a possible environmental disaster. While the theme was far from new, the sense of urgency—and possibility—certainly was. The determination to find a solution may have been fueled in part by desperation—and the fact that the world had just been dealt a sobering slap in the face by the financial crisis. That the Copenhagen talks at times seemed like a tussle between the US and China to take the lead in addressing climate change suggests this decade will witness some tremendous geopolitical changes.

Of course, 10 years is an extremely long time in the financial world, and the last time Global Finance dusted off its crystal ball to predict the likely events of the 2000s the results were mixed, to say the least. At the turn of the millennium, we asked some key questions: What if the bottom falls out of Wall Street? What if the Internet bubble bursts? What if Latin America rebounds? All three happened, one way or another. But we also suggested China’s regime might collapse, EMU might fall apart, and the emerging markets could dollarize—almost polar opposites of what actually took place.

In this decade’s look ahead, we take a different approach, studying some of the key areas of finance that are likely to go through dramatic and perhaps tumultuous change over the next decade. One key question, the answer to which will define the business and financial worlds for years to come, is, what is the future of globalization? Author of the book Globality: Competing with Everyone from Everywhere for Everything, Harold Sirkin has studied this field for years and offers his take on what we can expect to see unfold during this decade.

Given the scale of its influence on the banking world, one of the most important developments that will define the next decade will be the explosion in availability of information. Already it has wrought a dramatic transformation of the world of global business, and over the coming decade the amount—and the quality—of the information available to anyone with an Internet connection will only grow. We look at how this will change the financial and business landscape, what corporations must do to keep pace, and how the information revolution will affect interactions between corporations and financial institutions over the next few years.

Technology has also been key in enabling foreign exchange to become the world’s biggest market. At the same time, technology has created an environment for tremendous short- and long-term currency volatility as legions of investors can pile into or out of a currency in milliseconds. The next decade will almost certainly see some startling foreign exchange moves—not least in the dollar, which enters the new decade on decidedly shaky ground. As we forge ahead into uncharted territory, we assess the implications the dollar’s demise would have for the whole global financial system.

While increasingly investors and corporations are looking for alternative sources of finance, governments are searching for ways to fund their pressing infrastructure construction needs. It is already clear that the world’s infrastructure will change dramatically in the decade ahead as a result of trends already in place, such as the need to reduce carbon emissions to head off an environmental disaster—and governments’ need to pour vast amounts of money into real projects in an attempt to steady their tottering economies. They will be looking for help in funding this from both private investors and banks.

The banks, though, have been on the sharp end of some extremely unwelcome scrutiny lately. Recent turmoil has—quite reasonably—triggered a cacophony of calls for tighter regulation, more effective risk management and stricter oversight of the world’s biggest banks. The reality will, of course, be a compromise, but there is no doubt that the formidable backlash against laissez-faire capitalism will affect the future shape of the banking industry.

And while bankers keep their heads down and hope the storm will soon pass, corporations are still wrestling with the fallout from the credit crunch. The feared financial meltdown was eventually averted by huge capital injections from central banks and governments around the world, but that torrent of liquidity will soon dry up. What happens next will define the business environment for the early part of this decade.

With so much changing—and so much at stake—there is no doubt this will be a fascinating, though perhaps unsettling, time in the financial world.

Cover Story: Credit Where It’s Due