Although there are some bright spots, many CEE countries face the prospect of another economic downturn thanks to tight European ties. 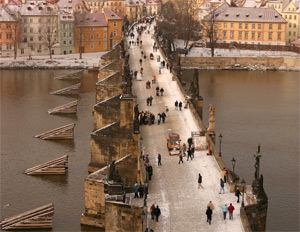 For most countries in the postcommunist world, 2011 has proved to be a cruel year, when initial hopes of recovery from the 2008 economic crisis were dashed and old fears—about the strength of their currencies, banks and external indebtedness—returned to haunt them.  On top of all this, many have had to accept that one of the core principles that has been guiding and sustaining economic policymaking over the past few years has all but evaporated. “Central European countries now look as if they are going to get hit by an economic downturn for the second time whilst hopes of euro membership—and economic convergence with the eurozone—have come off the boil,” says Charlie Robertson, global chief economist at Renaissance Capital.

The irony is that the challenges these countries now face are a consequence of their having closely integrated themselves into Europe and opened their economies and financial systems up to the world from which the old communist system kept them so insulated. An indication of just how tough the year ahead could be came in late October, when the OECD cut its forecast for 2012 eurozone growth from 2% to just 0.3%. It hinted that even this modest level might not be attained if there were significant delays in implementing the Greek rescue package or if other eurozone countries get dragged down into crisis.

Other observers of Central and Eastern Europe have been revising their own forecasts, and now suggest many countries will struggle to grow during 2012—after a bumpy ride in 2011, which saw strong growth early in the year decline as the year proceeded. In late October the European Bank for Reconstruction and Development (EBRD) lowered its 2011 forecast for the whole region of Central Europe and the Baltic States, Southeastern Europe and the former USSR to 4.5% from 4.8% just three months earlier, and its 2012 figures from 4.4% to 3.2%. “The bottom line is that [for the first two of these groups] how and when the eurozone crisis is resolved is now absolutely key,” says Piroska Nagy, director of country strategy and policy in the EBRD Office of the Chief Economist.

As an indication of its concern about the possible impact of the Greek/euro crisis on emerging Europe, the EBRD is calling for a second Vienna Initiative—a follow-up to its successful 2009 plan aimed at preventing Western European parent banks from pulling out or disinvesting from the region where in many cases they now dominate the banking sector.

Nagy says international financial institutions like the EBRD have the know-how, impartiality and financial muscle to make a difference, although their balance sheets are more constrained than in 2008–09. “IFIs need to distinguish between different countries and risks...although the numbers are getting big, they do still have the capacity to provide financial support where it is needed,” she says. A closer look at emerging Europe suggests that the more tightly tied a country’s economy is to the eurozone, the worse its prognosis.

In practical and relative terms, this means that over the next few months countries in the former USSR look set to perform quite well. Demand for hydrocarbons is helping boost the economic prospects for oil- and gas-producing nations in Central Asia and the Caucasus, while Russia’s prospects are being further boosted by demand for its raw materials: According to the EBRD, this year’s forecast growth of 4.2% is expected to remain the same next year. But Russian policymakers have major concerns about capital flight—topping $50 billion this year so far—which, coupled with loose monetary policy, has contributed to ruble depreciation. Many observers feel that with its banks also facing a liquidity squeeze, Russia’s outlook is less robust than upbeat economic forecasts suggest.

“The financial system is vulnerable to a drop in the oil price and/or a rise in global risk aversion,” concluded London-based economics consultancy Capital Economics in a market update in mid-October.

By contrast, Central and Southeastern Europe’s prospects look rather more bleak. The EBRD is forecasting GDP growth next year of 1.7% in Central Europe—just half of its July prediction—and predict Southeastern Europe will not grow by more than 1.6%— considerably less than the 3.7% forecast in July. And these figures were released before Athens cast new question marks over the eurozone with its political machinations over the EU’s bailout package.

“A few months ago the consensus was that these regions would come through the downturn relatively unscathed. I always reckoned this was optimistic, and so it has proved to be,” says Neil Shearing, chief emerging markets economist at Capital Economics. He reckons the best-case scenario is a slowdown in growth—reflecting further weakening in export demand—and the worst case involves the crisis spreading to Western European banks, which in turn leads them to cut back or even curtail their activities in the region, possibly ushering in another recession to equal that of 2008–09.

"A few months ago the consensus was that these regions would come through the downturn relatively unscathed. I always reckoned this was optimistic, and so it has proved to be"

On the plus side, banks in the region are stronger and better capitalized than before, reflecting the fact that they haven’t engaged in much local lending. On the negative side, banks are acting in a highly risk-averse manner, prompted by the need to boost reserves to adhere to new international banking regulations. This restraint suggests there will be only limited growth in loan volumes, and thus profits, over the coming year.

Some Western banks may leave the region altogether. Andrezj Nowaczek, bank analyst at ING Financial Markets, predicts some smaller players—like Millenium BCP of Portugal, and Belgium’s KBC, both of which are active in Poland—may do this. However, the consensus among analysts is that larger foreign players will probably stay put.

Another major concern is that the recent weakness of Central European currencies against the euro has led to renewed international focus on debt levels.

Historically the region had relatively low debt—certainly when compared with Western Europe— but in recent years public and private debt have grown. Hungary, in particular, is becoming a cause for concern: Recent estimates put its total debt at around 76% of GDP, of which 80% is public. With the Hungarian government’s room to maneuver limited and—like the Czech Republic and eurozone member Slovakia—its exposure to eurozone trade and investment flows considerable, the country could go back into recession in 2012.

Rising debt is even of concern in Poland, the only EU country to grow during the recent recession. Because of its large internal market and good governance—prime minister Donald Tusk deservedly won reelection in October—it is the brightest spot in the region today. GDP is expected to grow this year and next but less than initially hoped, with policymakers keeping an eye on rising government debt levels. Once these reach 55% of GDP the authorities are constitutionally obliged to take certain steps and, at 60%, run a balanced budget.

International perceptions about each country’s GDP growth, debt and currency prospects have been reflected in debt yields, which have been rising for most countries in the region—but still remain well below the yields of more than 20% seen on ten-year Greek debt. As of early November, Polish ten-year debt was yielding 5.7% and Hungarian 7.9%, suggesting investors are becoming more wary of the region’s debt profile—a problematic scenario for a region that is still highly dependent on foreign capital.

“When you compare the situation [in Central and Southeastern Europe] today to how it was in 2008–09, the one area where things look much worse is currency weakness,” says ING’s Nowaczek. He notes that countries such as Bulgaria, Romania and Serbia have the added worry of Greek bank ownership within their banking sectors, and also concerns over the implications of a Greek default. At least most of Central and Southeastern Europe—with the exception of euro members Estonia, Slovakia and Slovenia—can be thankful they didn’t join the single currency union. “As 2012 proceeds, these countries will find it a blessing that they can still use monetary policy to adjust to what will inevitably be a very challenging year,” says Renaissance Capital’s Robertson.

Unlike in Shakespeare’s Richard III , in Central and Eastern Europe the “glorious summer” seems to be quite some time away, and a “winter of discontent” is just beginning.