THE ARAB SPRING’S COSTS AND CONSEQUENCES

Countries in the region are evaluating the economic outcome of social and political upheaval—both the opportunities and the challenges. 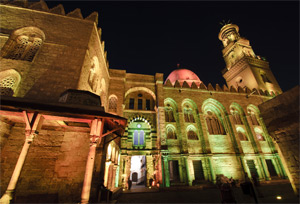 Commercial International Bank, Egypt’s largest private sector bank, is proud to be Egyptian. CIB is building a huge tower just north of Sixth of October Bridge in Cairo to fly the biggest Egyptian flag in the world. The size of the flag, which will be visible from all over the capital city, was limited only by its ability to flutter in the breeze coming off the Nile, says Hisham Ezz Al-Arab, chairman and managing director of CIB. “The engineers told us that if it was any bigger, it would just hang down under its own weight,” he says.

Ezz Al-Arab’s exuberance is irrepressible. “With the revolution of January 25, we feel that the future of Egypt is positive,” he says. “We believe one of the main milestones achieved by this revolution is the boost in transparency and accountability, and a more level playing field will emerge with a focus on economic as well as administrative reforms.”

Egypt’s ruling military regime, led by field marshal Hussein Tantawi, announced that the first parliamentary elections since the uprising would begin on November 28, although results of the voting were not known at press time. A date for the presidential election has yet to be set.

Egypt, Syria and Libya paid the highest financial price for the uprisings this year while the oil-producing nations of the Arab Gulf have benefited the most, according to a report by Geopolicity, a consultancy specializing in post-conflict transitions. For the countries hit hardest by political unrest—including the three already mentioned plus Tunisia, Bahrain and Yemen—the protests of 2011 have cost more than $50 billion in lost output and revenues, the report says. This does not take into account the loss in human lives, infrastructure damage, and lack of investment by businesses, both foreign and domestic.

The regional economic impact of the Arab Spring is mixed, however, with oil exporters such as Saudi Arabia, Qatar, Kuwait and the United Arab Emirates enjoying significant growth in GDP as high oil prices support big increases in government spending.

“The Arab world—which in recent years embraced Western economic ideology—has now reached a crossroads: Adopt a regressive stance which sacrifices reform for special interests, or embrace greater transparency, social equity and global integration,” Geopolicity notes, adding that the revolutions could potentially be regressive, but the opportunity for a positive outcome has never been greater.

Ezz Al-Arab of CIB says he expects investment in Egypt to accelerate once confidence is restored following the election of a new president. He notes: “We are confident that a new Egypt will emerge that is much more prosperous and that is one of the most attractive business environments in the region.”

The move to a more open political system will strengthen Egypt’s existing institutions, eliminate much of the corruption that now plagues the market and lead to healthier corporations, Ezz Al-Arab predicts.

In neighboring Libya the National Transitional Council officially announced the country’s liberation on October 23, following the capture and death of former leader Muammar Qaddafi. The North African country is expected to have little difficulty in attracting foreign investment because of its oil resources. Further to the west in Tunisia, where the Arab Spring movement began, the vote for a new assembly was held on October 23, with the moderate Islamist party Ennahda emerging victorious.

While political turbulence continues in countries such as Syria and Yemen, relative calm has been restored to the Gulf Cooperation Council (GCC) countries, according to a report by Kuwait Finance House. The bank’s researchers say Saudi Arabia and Qatar will lead real GDP growth in the region this year. Qatar, which is now in the final stages of its natural gas investment boom, will likely have real GDP growth of 20%. Economic growth in the GCC as a whole will be about 6% this year, followed by 5% in 2012, KFH estimates.

"Islamic finance witnessed rapid growth, not only in Islamic markets, but worldwide during the past few years"

Bank lending in the region going forward will have select pockets of strength, says Adel El-Labban, group CEO and managing director at Ahli United Bank in Bahrain. “Lending is anemic right now, and banks will have to be adaptive to create loan demand,” he says. “If we get 3% to 4% loan growth, that will be good.”

However, solid economic growth will lead to a rise in demand for loans, which will allow Islamic financing to further prosper, says Mohammed Sulaiman Al-Omar, chief executive of KFH. “Islamic finance witnessed rapid growth, not only in Islamic markets, but worldwide during the past few years,” he says. Trust and acceptance for the product were cemented by the global financial crisis: Since it prohibits interest, deals in the real economy and is asset backed, it is considered to be the safest form of financing, according to Al-Omar.

The Islamic finance market will continue to grow at 15% to 20% a year, Al-Omar says: “A promising future awaits Islamic financing in the region’s markets, in light of the expansionary policies adopted by most countries in the GCC, which plan to increase spending on development projects.” Sukuk, or Islamic bonds, will likely be pivotal to infrastructure finance in the region, as more than two-thirds of sukuk in the first half of 2011 were issued by sovereign and quasi-sovereign entities.

KFH has issued several sukuk through its subsidiary Liquidity Management House, which led or participated in issues totaling $4 billion in the past few years. It is currently working with the Kuwaiti government to create legislation that would allow the issuance of sukuk in Kuwait.

Bahrain has returned to business as usual, but the economy is still feeling the impact of a real estate bubble that burst well before the recent political developments, according to El-Labban. Meanwhile Hashim Shawa, chairman and general manager of Bank of Palestine, says there has been no major negative impact on the West Bank and Gaza as a result of the Arab Spring.

An economic boom began in Palestine in 2008, with 8% GDP growth, followed by 9.3% growth in 2010. The Palestine Exchange, known as the PEX, was the number-two-performing stock market in the Arab world in the first half of 2011, second only to Iraq. “Thanks to the resilient nature and entrepreneurial spirit of the Palestinian private sector and its people at large and despite the political instability and the ongoing Israeli occupation, the PEX has been able to attract significant international investment from institutional and private investment. Some companies have as high a foreign investor ownership as 30% and 40%,” Shawa says.

However, Palestine is facing delays in funding from the US after president Mahmoud Abbas submitted the Palestinian application in September to become a full member of the United Nations. The US Congress blocked nearly $200 million in budget assistance to the Palestinian Authority—funds that would support its efforts to build a functioning state. 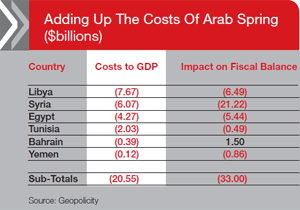