PREPARING FOR THE WORST

Latin American countries are starting to build reserves and diversify economies to brace for a possible global downturn. The question is whether it will be enough to protect the export-driven region. 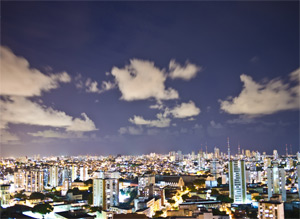 When Latin American leaders met in Paraguay in October, only half of the 23 heads of state invited to the 21st annual Ibero-American Summit were in attendance. The presidents of Brazil and Argentina skipped the meeting to prepare for the G20 conclave in France. While the region emerged from the 2008 global economic downturn relatively unscathed, a mounting European debt crisis, ongoing US economic sluggishness and an expected slowdown in Chinese demand are unleashing concerns over what the outlook for 2012 may look like.

Enrique Iglesias, the Summit’s general secretary and former head of the Inter-American Development Bank, told the region’s leaders that Latin American countries should pursue greater integration in order to face any future global crises. Paraguayan president Fernando Lugo, the meeting’s host, opened the session with a rather negative outlook. “This year we are facing a more serious crisis than before, created by developed countries,” he said. “In the absence of a solution, this crisis appears to be getting worse every day.”

Brazilian president Dilma Rousseff, who heads the region’s largest economy, opted to instead seek a global solution: During the summit she was on her way to France to put part of her country’s foreign reserves on the table for a eurozone rescue plan.

"This year we are facing a more serious crisis than before, created by developed countries"

This year’s summit seemed to rehash topics of previous years: Participants once again condemned the US embargo on Cuba and, reviving memories of a war that ended in 1982, called on Argentina and Great Britain to resolve pending issues from their sovereignty conflict over the Falkland Islands.

Although few, if any, analysts predict an economic debacle for Latin America as a result of external shocks, they concede that much of the region’s recent dynamism may, nevertheless, be tempered. The Organisation for Economic Co-operation and Development (OECD) and the United Nations Economic Commission for Latin America and the Caribbean (Eclac) presented an outlook report at the Summit that says global economic volatility will be the greatest cause of uncertainty for regional growth in 2012.

“Latin America needs to keep using its robust commodity exports to move towards a more diversified and productive economy,” says Andres Djordjalian, a Buenos Aires investment model manager with Covestor, who feels progress has been made but that much remains to be done. “In 2012 we may expect those further steps to be conditioned by weak demand from the developed world and strong but volatile capital inflows that may weigh on currency stability and inflation,” he adds.

John Murphy, of the Latin American practice group at law firm Foley & Lardner, says: “I think Latin America has benefited and will probably benefit in 2012 and beyond, due to high prices for commodities and raw materials, but the biggest challenge is to take advantage of these gains to develop infrastructure and insulate the economy from the future downturn [in prices] that will eventually happen,” he says. Murphy argues that when commodity prices are high, markets tend to overlook the inefficiencies and infrastructure problems that add to the cost of moving products. However, when prices drop, markets are less willing to absorb the added costs.

China will remain an important factor on several fronts. “China seemed to be focusing at first on importing raw materials from Latin America, but then they went beyond that to investing in oil and natural resources,” says Murphy. “I think we will see that expanding to manufacturing, agribusiness and other industries. Latin America needs to keep an eye to China, not only as a buyer but as a partner on the ground.” While Chinese manufacturers, particularly automakers, are setting up shop in the region, China’s ranking as the world’s second-largest energy consumer, behind the US, means its focus on oil and gas will remain strong.

According to José Ángel Gurría, secretary general of the OECD and a former Mexican finance minister, China is already the third largest foreign investor in the region, with 17% of its overall direct investment in 2009 going to Latin America and the Caribbean. Total investment from China to the region, including financial investments, was a record $41 billion in 2010. “The fact that Latin America and China are two of the main pillars of global economic dynamism in the coming years is an opportunity for closer relationships,” suggests Gurría, who contends China’s hefty foreign reserves could be used to finance Latin American infrastructure and innovation.

Chinese trade with Latin America rose to around $170 billion in 2010. The Asian dragon became Brazil’s largest trading partner in 2009. Imports from China to Latin America in 2010 were 15 percentage points higher than those from the US and 20 percentage points higher than those from Europe. “If they keep this trend and China’s demand for Latin American products grows at only half the pace it has done so far this decade, China is likely to replace the European Union as the second partner for Latin American trade in 2014,” Gurría predicted at the regional summit.

For those companies considering investment in the region, there are solid prospects, thanks to shifting market dynamics and demographics. “Throughout Latin America, two significant changes look promising and are likely to produce increasing opportunities for international business,” says Mona Pearl, a global business development and negotiation strategist who founded BeyondAStrategy in Chicago. “One relates to sheer numbers. The portion of the population referred to as ‘bottom-of-the-pyramid consumers’ represents over 400 million citizens.”

Pearl says lower-income consumers in the region are experiencing a surge in purchasing power. “Secondly, technology infrastructure projects are under way. The increased collaboration in building a modern network of telecommunications, power grids and undersea fiber optic cables will set the stage for more efficient and effective communications in the large geographical area.”

Latin American countries appear well positioned to handle the impact of another global downturn. Governments have worked to address structural issues, and the region’s banks have built up significant liquidity reserves to shield themselves from the effects of global contagion. “The financial crisis of 2008 illustrated that Latin America in fact has begun to take measures to mitigate the effects of international crises on their local economies,” says Carl Adams, senior managing director and head of origination and structured finance, Americas, at Espírito Santo Investment Bank.

“Latin America is in a very strong position to tackle the contractions and negative effects that we are currently experiencing due to the ongoing European crisis,” adds Adams. “In addition, because of the relative economic stability and financial strength that the region has developed over the past eight years or so, to the extent that the investment flows are available, Latin America is and will continue to be the region of choice for these flows.”

The OECD-Eclac report is also optimistic. “In spite of the global financial crisis, the situation of Latin American economies has improved substantially in the last few years,” says the report. “The region’s governments must take advantage of this opportunity.”