Asia is watching closely to see what happens to the West's buckling economies. However, intraregional trade growth and ever-increasing trade between the emerging markets will help cushion any impact. 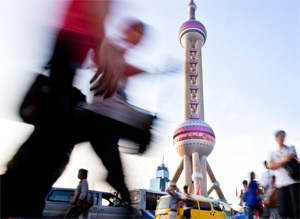 Much of the world’s attention is focused on whether European political leaders can finally resolve the eurozone debt crisis and avert a double-dip recession. In the meantime, Asia is playing something of a waiting game.  Visiting London in October as European political leaders continued to struggle to contain the eurozone debt crisis, Karen Fawcett, group head of transaction banking at Standard Chartered, summed up how the crisis in Europe was perceived in the East. Although Asian economies rely less and less on trade flows with the West, she said any significant drop-off in demand in Europe and the US would still affect the region: “Trade values in Asia are still quite healthy because of commodity prices, but three years on, have we got a picture that looks awfully like the end of 2008?”

As the world’s factory, Asia relies on demand from consumers in rich Western countries to a large extent for its good fortunes. And although some have tried to argue that the old adage, “When America sneezes, the rest of the world catches a cold,” is no longer applicable to Asia’s export-led economies, Yukon Huang, a senior associate in Carnegie Endowment’s Asia Program, says Asia is still affected by what happens in Western economies.

“There is no such thing as full decoupling,” he says. “Major declines in Europe and the US will have a negative impact on East Asia.”

In its “Regional Economic Outlook: Asia and Pacific,” published in October, the IMF noted that growth in the region is moderating but the region should be able to sustain activity contributing to “relatively robust growth” of 6.7% in 2012. It warned that the risks for the region are “tilted to the downside” based on the turbulence in the eurozone and the potential for a severe slowdown in the US, which would spill over into Asia. “While domestic demand remains strong, Asia has clearly not decoupled from advanced economies,” added the IMF report.

However, the extent to which economic growth has moderated in Asia differs between countries, said the OECD in its October “Asian Business Cycle Indicators” report. Although local demand remains “relatively robust” in countries such as Thailand and Indonesia, the OECD report said it is weaker in countries like the Philippines. It noted that growth momentum in Asia’s two main emerging market economies, China and India, was becoming weaker than in the Asean countries, although economic conditions in the two countries were markedly different—with domestic consumption in China remaining robust and inflationary pressures easing, while India could see high inflation and a slackening in domestic demand.

With elections scheduled for 2012 in China, Huang says Chinese policymakers are more worried about inflation than a slowing economy. Inflation is a concern shared by India. In October the Reserve Bank of India raised its repurchase rate by 25 basis points to 8.5%, with wholesale price inflation averaging 9.6%. Fitch Ratings revised its real GDP growth forecasts for India downwards to 7.5% and 8.0% for 2012 and 2013 respectively—from 7.7% and 8.2% previously.

In Thailand, having revised economic growth forecasts for 2011 downwards from 4.1% to 2.6% after widespread local flooding, Thailand’s central bank Monetary Policy Committee expects the economy to grow by 4.1% in 2012 on the back of rising domestic demand, which it says will counteract some of the losses from a global slowdown in exports.

Looking ahead, the IMF report notes that the crisis in the West should serve as a reminder to Asia to focus on “economic rebalancing and developing stronger domestic engines of growth.” Views are mixed, however, on whether Asian economies, particularly China, can stimulate domestic demand enough to counter any potentially negative impact from a worsening of economic conditions in Europe or the US.

The only way to get consumption to grow is [through] direct transfers of wealth from the state. China needs to rebalance its economy

While domestic consumption in China is increasing, it is still far from the largest share of total production, says Michael Pettis, a senior associate in the Carnegie Asia Program. “Chinese consumption won’t save China,” he says. “The only way to get consumption to grow is [through] direct transfers of wealth from the state. China needs to rebalance its economy.”

Huang notes that China’s economy is less dependent on global trade patterns as a result of higher trade levels across the South-South corridor—between emerging markets in the Southern hemisphere.

Given China’s rise as a major trading partner for a number of Asian countries some Southeast Asian economies, Huang says, are optimistic that growth will continue to rise on the back of strong Chinese demand for commodities. But the growth in intraregional trade among Asian countries, Pettis notes, is not sufficient to boost domestic demand in Asia.

“The US and Europe are still the biggest markets for Chinese exports,” he explains. “So if European and US current-account deficits come down, then countries with large surpluses are vulnerable.”

Although countries like Taiwan and South Korea currently run trade surpluses with China, Huang says that as China seeks to move up the value chain, it is transforming itself from the world’s factory into a provider of more-specialized, value-added services in an effort to create more jobs and meet rising wage demands. But this is creating tensions between Asian countries, which are starting to have more of a “competitive relationship,” according to Huang.

Other observers, while admitting that the ongoing economic uncertainty in the West presents considerable downside risk for Asia moving forward, point to major risk factors such as rising local government debt in China that suggest parallels with Greece. In early October, Moisés Naím, a Venezuelan writer and columnist, penned an article in Spain’s El Pais , saying that if “the world’s economic engine” stalls as a result of financial, environmental or social factors—he cites job creation and inequality—the consequences could be much worse than those that would follow Greece's defaulting.

Huang says these bank loans to local governments are really “quasi-fiscal deficits,” as the banks are an extension of the government, and if they become nonperforming loans or are written off by the banks, then the government’s budget deficit is likely to be more in the region of 7% to 8% of GDP, instead of the projected 2% to 3%.

But, despite what he terms “credit concerns in the mainland banking system” and continuing “headwinds” from local government debt, Michael Chiu, manager of the ING Greater China Fund, says that the central government has more than enough capabilities to deal with the risks—given its solid forex reserves, which equate to 46% of GDP. Huang says there is not likely to be a major stalling of China’s economy as the state can prop it up using a stockpile of reserves.

“China is likely to move to a more sustainable growth rate, in the next three-to-five years, of approximately 8%, but it will be looking for more quality growth.”

Huang says China’s national budget as a share of GDP (25%) is below normal for middle-income countries, where national budgets are typically 32% of GDP. He says there is scope for further expenditure to address “pent-up demand for social services.”

China also has to contend with increasing “pockets of social unrest” as people fight for access to land and resources. “We are likely to see more social unrest in the coming years, which will put strains on the economy,” says Huang. “As people become more urbanized, they are tolerating less in terms of injustices.”